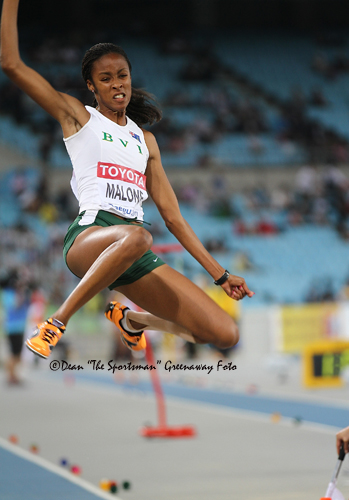 Malone powered off the board to cut the sand at 6.68m (21’11”) a Long Jump personal best leap that improved her own National Record, at the Chris Brown Bahamas Invitational in Nassau on Saturday night. She finished second in the event.

Also at the same meet, Tahesia Harrigan-Scott lowered her 100m season’s best to 11.44 seconds to place fourth while Ashley Kelly made her 400m debut in the B race, finishing second in 54.61 seconds.

In California, King sped to a 200m personal best to win the Mondo Invitational in Sacramento on Saturday. King, who ran 23.65 seconds last week, narrowly missed the 23.30 World Championships qualifier, when she stopped the clock at 23.35 into a -0.5 wind.

At the same meet, Portland State Vikings Sr. Dominique Maloney missed her 400m personal best by .01 when she finished third in a season’s best 55.33 seconds. She shaved .01 off her 200m life-time best in the same race with King, finishing sixth in 24.45.

Morgan State Bears Sr. Britney Wattley, competing at the Don Webster Invitational on the Coppin State University campus in Maryland, notched season’s bests in both the 100 and 400m.

Bethune-Cookman Jr. Keron Stoute was third in the High Jump at the Hurricanes Alumni Invitational in Miami, after clearing the bar at 2.03m (6’8”). He cut the sand at 6.43m (21’1¼”) to finish tenth overall in the Long Jump. He was coming off a windy 10.88 run in the 100m in the College of the Bahamas Invitational.

Else where, competing at the Florida High Schools Athletics Association 2A District 14 meet, American Heritage High School Sr. Khari Herbert, won the 400m in 48.41 seconds, then placed second in the 800m in 2 minutes 04.29 seconds.