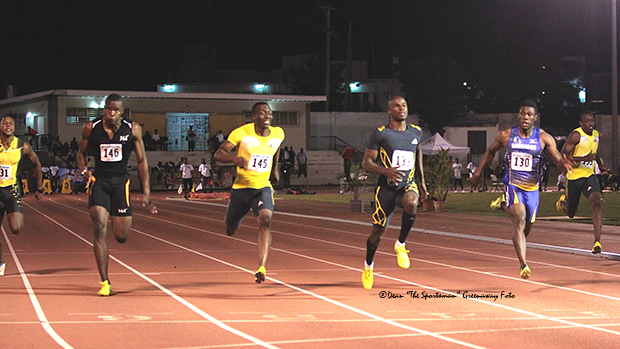 JUNE 2—St. Kitts and Nevis’ sprint veteran Kim Collins returned to the British Virgin Islands to compete for the first time in 19 years and highlighted the listing of six All Comers Records falling in the inaugural BVI Twilight Invitational, before a capacity crowd at the A. O. Shirley Recreation Grounds.

Collins got his patented start and led his countryman Antoine Adams to a 1-2 finish over Jamaica’s Dexter Lee, winning the 100m in 10.19 seconds, to take down Anguilla’s Zharnel Hughes All Comers mark of 10.45 seconds from 2012.

“I wanted to run faster, but I’m still happy with the performance,” Collins said. “This meet is a great idea and a great atmosphere. We want people to understand that you can see world class performances here, because not everybody has money to go to the World Championships in Russia, this year, but, you can have people of that caliber here. It also gives motivation to the younger athletes to want to reach that height.”

All eyes were on the British Virgin Islands double sprint record holder Tahesia Harrigan-Scott in the women’s 100m, who was competing in the territory for the first time since 2010—the last year of the 2 day BVI Invitational that started in 1971. She established the All Comers record of 11.22 seconds then.

But, it was Puerto Rico’s Genoiska Cancel besting Canada’s Kimberly Hyacinthe for the surprise win in 11.62 seconds to Hyacenthe’s 11.63. The BVI’s Karene King was third, equaling her season’s best of 11.65. Harrigan-Scott—nursing a slight injury—was sixth in 11.94.

Jamaica’s Patricia Hall had the night’s lone double victory and set the All Comers Record breakers tone by demolishing St. Kitts and Nevis’ Tiandra Ponteen’s 52.74 seconds from 2010, with a mark of 51.34 seconds. Hall was followed by fellow Jamaican Anastasia Leroy in 51.65—02 faster than St. Vincent and the Grenadine’s Kenike Alexander’s 51.67.

The race also included two BVI athletes running at home for the first time in three years. Finishing behind the Dominican Republic’s Raysa Sanchez’s 53.32 in fourth, was Ashley Kelly with a season’s best of 53.54. Chantel Malone was eight in 55.02.

Hall completed her double with a 22.93 victory in the 200m. King equaled her 23.35 personal best in second, avenging a loss to Alexander in Puerto Rico two weeks ago, with Alexander getting to the line in 23.40, for third.

In the absence of 2004 Athens Olympic champ Jeremey Wariner of the USA who decided to put the finishing touches on his European tour, Dominican Republic's Gustavo Cuesta produced a strong homestretch run to win the Men’s 400m in 45.87 seconds to break Grenada's Kirani James' 46.85 All Comers Record from 2008.

Canada’s Women’s 4x100m Relay quartet of Crystal Emmanuel, Kimberly Hyacinthe, Shai Anne Davis and Khimica Bingham, ran 43.97 seconds to win and eclipsed the All Comers Record of 44.34 established by the BVI in 2010. The Dominican Republic was second in 44.13 while the BVI placed third in 44.65, followed by Puerto Rico in 45.82.