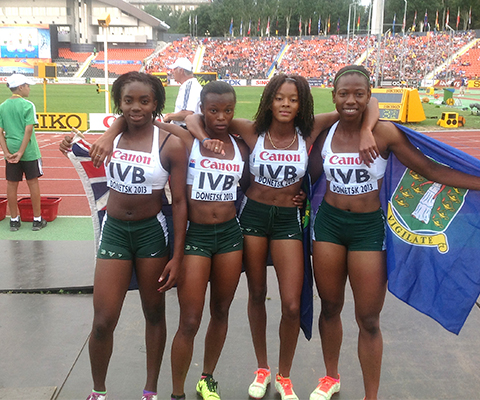 JULY 14—The British Virgin Islands joined Jamaica and Barbados as the only English speaking Caribbean countries to earn a medal in the 8th IAAF World Youth Championships that wrapped up today in Donetsk, Ukraine, when the Medley Relay quartet earned silver behind the United States in a NACAC 1-2 finish.

The team of Taylor Hill, Nelda Huggins, Jonel Lacey and Tarika “Tinker Bell” Moses, had a time of 2 minutes 07.40 seconds to finish ahead of hard charging Japan.

Lacey who was sick on Saturday and did not run the 200m semifinals, replaced 800m runner Lakeisha “Mimi” Warner who carried them into the final with a gritty 400m anchor leg after passing the Czech Republic runner, as they finished second to Canada in the semis with a time of 2:08.80. With Lacey’s insertion in the final, she ran the 300m while Moses moved up to the 400m, with Hill leading off the 100m and Huggins followed in the 200m.

“I couldn’t’ disappoint the team,” Warner said of her semifinal run. “After running a poorly done 800m, I had to prove myself that I didn’t come here just for a trip, so I had to run it hard to the best of my ability and beat the Czech girl.”

Hill said her focus was just on getting the stick to Huggins. “I don’t recall saying stick at all,” she said. “I didn’t like my start, but I was able to pick them back up though.”

Huggins, who ran in the heats on Saturday morning then the 200m semis in the afternoon, said she was a bit tired. “I tried to be strong and get the baton around the curve and tried to stay with the American girl and pass the stick correctly to Jonel,” she said.

Lacey said her plan all along was to run the relay. “Whether I was sick or not, I wanted to run the relay because I wanted a medal,” she said. “After getting the stick, I decided to just run and stay close to the American girl, so Tarika would have a good gap, so that the Chinese couldn’t catch us.”

Moses who told the team before the race they have to win a medal, said she didn’t know what was going through her head after she got the stick. “It was like hold on, try, we need a medal,” she explained. “I told the team that we wanted a medal and we just have to run.”

It marked the first time BVI athletes were in action all five day of the competition.

The BVI has now had finalists in three of the four IAAF World Championships events, with Tahesia Harrigan-Scott being an Indoor 60m finalist and medalist in 2008 and a 2010 finalist. She was also a semifinalist in the IAAF World Outdoor Championships in 2009. Chantel Malone in 2010 was an IAAF World Jr. Championships finalist in both the Long Jump and 400m.

Moses opened the competition on July 10, by placing third in her heard and automatically advancing to the 400m semifinals, after running 55.87 seconds.

She was seventh in her semifinal heat in 56.65, running from lane 1.

Kyron McMaster in his 400m race, was timed in 49.52 to finish a non advancing fifth.

In the 100m, Huggins the first of two BVI entrants along with Hill, ran 12.15 seconds to place third missing the automatic qualifying spot as the first two advanced. She was .03 off the second placed time. Hill followed in her heat also placing third in a photo finish with the Czech Republic’s Veronika Palickova as both runners ran 12.10. Officials gave the nod to Palickova.

On July 11, Trevia Gumbs—the only field athlete on the squad—was affected by back issues in her Shot Put event which limited her performance to a 13.07 heave.

Huggins on July 12 seized a 200m automatic qualifying spot to the semifinals when she placed second in 24.24 seconds—a personal best, lowering the 24.33 she ran during the Elmore Stoutt High School Inter-House Championships on May 8. The mark is also a National Youth Record and a National Scholastic Record.

Lacey—although placing fifth in her heat—grabbed one of the three spots based on time from the fastest losers, when she sliced .03 off her personal best with a run of 24.65.

In the July 13 semis, Huggins was a non advancing fifth place in 24.65 seconds. Lacey who was in Heat 3 and Lane 2 was scratched because of illness.

“Every performance wasn’t what we expected, but they really came here with good attitudes, and a lot of confidence. We all knew they were going to medal today—we didn’t know the position—but we knew it was going to happen. And, it’s just awesome that it’s now a reality.”