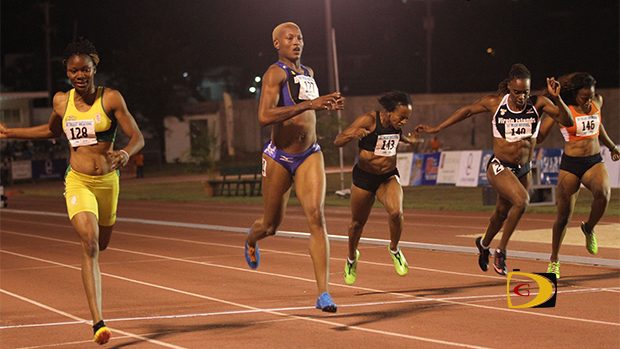 JUNE 8—Five All Comers and six meet records were broken, highlighting the 2nd BVI Twilight Invitational on Saturday evening at the A. O. Shirley Recreation Grounds.

Even before the opening ceremony had wrapped up, the USA’s Whitey Gipson opened the competition with an All Comers Record leap in the Long Jump, when she cut the sand at 6.42m on her first attempt. Her mark eclipsed the BVI’s Chantel Malone’s 6.09m record from 2008. Malone was second in a season’s best 6.29m effort and the U.S. Virgin Islands Waynetta Kirby, third in 6.06m—marking the first time that three women had cleared 6.00m in the territory.

Jamaica’s Anastacia Leroy who was second a year ago, won the Women’s 400m in 51.62 seconds—.03 faster than her last visit. St. Vincent and the Grenadines’ Kineke Alexander was second in 51.78 and the Bahamas’ former World Youth and World Jr. champion Shaune Miller third in 52.60.

The first record on the track went when the USA’s Torrington Lawrence took the 400m race out to win in an All Comers Record of 45.45 seconds and eclipsed the Dominican Republic’s Gustavo Cuesta’s 45.87 mark established last year. The U.S. Virgin Islands’ Tabarie Henry—coming off 2-years of injuries—ran a season’s best of 45.75 to hold off the Bahamas’ Chris Brown, who slightly hurt his back in warm up by .02. Cuesta was fifth in 47.18.

Tayron Reyes of the Dominican Republic outkicked the USA’s Richard Jones in the last 50 meters to win the 800m by taking down the BVI’s Greg Rymer’s 18-year old All Comers Record of 1 minute 50.12 seconds when he stopped the clock at 1:49.98. Jones was second in 1:50.71 followed by Puerto Rico’s William Gonzalez who was timed in 1:55.63.

Jamaica's Jermaine Brown—a member of their 4x200m World Record breaking team at the IAAF World Relays—nipped the USA’s Sean McLean at the line to win the Men’s 200m by .03 in an All Comers Record of 20.46 seconds, wiping out the 20.82 of Anguilla's Zharnel Hughes from last year. McLean finished in 20.49 followed by Honduras’ Ronaldo Palacios who ran 20.69, as the top five all went under the old mark.

Nelda Huggins, who has qualified for next month’s IAAF World Jr. Championships in both sprints, shattered her 100m National Youth and National Jr. Record of 11.77 seconds she ran last year and equaled at this year’s Carifta Games, with a time of 11.59 seconds to win the U20 Girls event. The wind reading was 0.8. L’Tisha “Lea” Fahie ran a personal best of 12.01 in second while Taylor Hill placed third in 12.12.