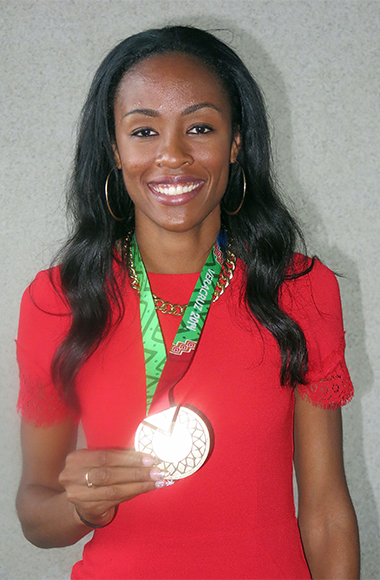 DECEMBER 21—Returning to the territory for the first time since winning the Central American and Caribbean Games Long Jump gold medal on Nov 25 in Mexico, Chantel Malone and was honored by the territory’s leaders for her accomplishment.

Premier Dr. Orlando Smith stated that there are three factors that contributed to Malone's success—her genes, her dedication and the assistance from numerous persons, including the Government.

“I feel honored and overjoyed from all the love and support that I have received after winning the gold at the CAC Games,” Malone said in her remarks after receiving a $16,000 check from Premier Smith and Sports Minister Myron Walwyn that goes with claiming a CAC Games gold. “I thank Jehovah God for blessing me with my talent and allowing me to compete at the best of my abilities at the CAC Games. Without Him I would be nothing.”

The reigning BVI Sr. Female Athlete of the Year thanked her parents and support system for the role they play in her development. She said as an athlete, she believes that it is very important to have a support system that helps to build, motivate and inspire you to be the best person that you can be.

“It takes parents who would get up at 5 a.m. to watch you run hills, coaches who would drive beside you as you do long runs…family and friends that give you pep talks when everything feels like it's caving in and your dreams are at risk,” she noted. “It's something as simply as my grandmother Ruth Malone calling me Actspectation... my granny Ellen Skelton asking me every time we speak, ‘which part of the world are you now’ and seeing the smiles on their faces when I succeed that gives me reason to keep moving forward.”

Malone encouraged her peers and the younger athletes to never stop dreaming. She said over her last competitions she has made it her mission to make her faith, bigger than her fear, noting there will be bad days.

“There will be times that you feel as though nothing is going your way but you have to remember your goals and your reason behind doing what your doing,” she pointed out. “Some people only see the outcome of our performances. They don't see the hard work, tears and sometimes blood that goes with the journey.”

As an example, she recalled leading up to the last IAAF World Championships, everything was going great until one week before departure she sprained her ankle so badly it was almost the size of a golf ball. She tried walking it off until her coach Beverly Kearny told her to stop walking, as her ankle swollen over her shoes.

“I was devastated,” she reflected. “Fast forward to the competition. Every jump that I took Mr. Potter (Winston) thought I was going to break my ankle. But honestly that was the last thing on my mind. I was there to compete. We could deal with the effects of jumping after I was finished.”

She had a 6.40m jump on a bad ankle that only by the grace of God was not broken but injured, she noted. “There’s no telling what I would have been if I was healthy,” the territory’s multi event record holder stated. “Don't let your fear out weigh your faith. And even when everyone has something negative to say or you may be reading the blogs and they try to break you, give them a reason to talk. Don't let them make you stumble. Continue digging until you have accomplished your dream.”

The road to success will never be easy Malone said, but, if you keep your eyes on the prize nothing can get in your way.

“It has taken a lot of failures and disappointments but I think that the time has come for all of us to rise and show what the BVI has,” she said.

Minister Walwyn who attended the CAC Games in Mexico, said it was a proud moment for the BVI.

"As a country, it was a proud moment for us because it shows that even though we are small in size, we continue to do magnificent things," he said.