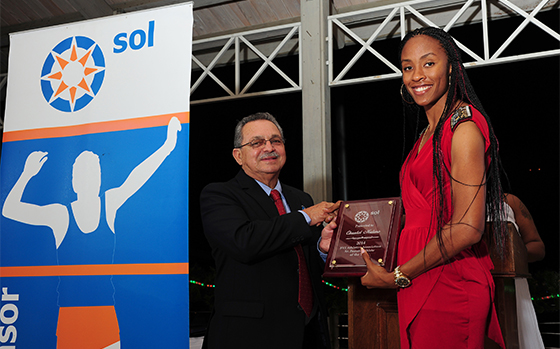 JANUARY 2—She was 4th in the 20th Commonwealth Games Long Jump in Glasgow, Scotland over the summer—the best finish ever by a British Virgin Islands athlete dating back to 1990 when the territory debuted in the games.

She ended her year by winning the CAC Games Long Jump gold medal on November 25, marking the 4th straight gold the BVI has won since 2002, but the first in a field event.

On Saturday, December 27, she then repeated as the BVI Sr. Female Athlete of the Year when awards were doled out by Sol, the BVI Athletics Association’s partner.

But what was it that made 2014 special for the multi talented Malone, who holds the National Record in the 400m, Long Jump, Triple Jump, shares the High Jump National standard and has her named etched in both the 4x100 and 4x400m Relay records?

“Finally getting a grasp of myself I think,” she said. “Going into Commonwealth (Games) that was a major mental change for me and I think that helped me towards the CAC Games because the beginning of my season was not like the normal Chantel. The results were horrible, so my confidence was dampered.

"A month prior to Commonwealth, I just really sat down and dug deep and finally decided to be the best that I can be or just show what I’m capable of and self belief and I think that’s what carried me through the Commonwealth Games and CAC Games.”