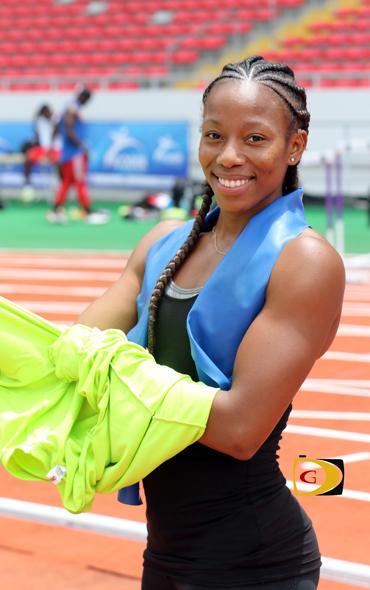 Ashley Kelly trigged a National Records streak in Boston on Friday night that included marks in Arizona, New Mexico and the BVI.

Kelly was second overall in the David Hemery Valentine Invitational 400m in 53.01 seconds, improving her best from 53.31, while taking down Chantel Malone's 5-year old mark of 53.23. In the process, Kelly also achieved the IAAF World Indoor Championships qualifying standard, marking the first time in its history, the BVI has two athletes qualify for an indoor championship.

Kelly joins Tahesia Harrigan-Scott who has qualified in the 60m dash and ran a season's best 7.21 seconds in Houston on Friday, to win the Howie Ryan Invitational. Harrigan-Scott has consistently run 7.28 or better every year since 2002 when she won NCAA Indoor Championships silver for the University of Minnesota, with a 7.22 time.

Competing at the Northern Arizona University Invitational in Flagstaff, Central Arizona College sophomore Tynelle Gumbs, improved her Weight Throw Record from 19.34m to 19.70 and broke Kelly Closse National Jr. Colleges' mark of 19.55 from 2009. Her mark is the top in the Jr. College rankings and twin sister Trevia improved her best from 16.50 to 18.01, for the No. 2 mark on the season.  She was fourth in the Shot Put with a 13.32m effort.

At the same competition, freshman Kyron McMaster ran 47.57 seconds for 400m on an oversized track, to place third. He also ran the 600m in 1:23.45 to win his heat and place second overall.

Tarika "Tinkerbell" Moses shaved her one minute 31.92 seconds 600m mark from Jan 23 in Boston, to 1:31.10 at the Don Kirby Invitational in Albuquerque on Friday night.

Djimon Gumbs improved on his Youth Discus Throw National Record from 46.50m to 48.19. He also won the Javelin with a personal best throw of 46.80m.

K'Cel Moses ran under 50 seconds for the first time with his 49.93 personal best while Rakeel Jack, 15, established an U16 record with his 50.47 seconds time in the prelims and followed up with 50.59 in the final.

South Plains College sophomore Taylor Hill was sixth in her heat of the Tyson Invitational 60m dash with a time of 7.65 seconds.

Long Jumper Chantel Malone had a season's best leap of 6.56m to finish fourth in Berlin, Germany on Saturday. She had a 6.45m opener in Stuttgart on Feb 9 where she was fourth and 6.16 in France, where she also finished fourth. She ends her European Tour in Glasgow, Scotland, on Feb 20.

On Monday, St. Augustine Jr. Khari Herbert, became the 12th BVI athlete to win a major conference title, when he won the 400m at the CIAA Conference Indoor Championships in Winston-Salem, North Carolina. Herbert had a winning time of 48.23 seconds.