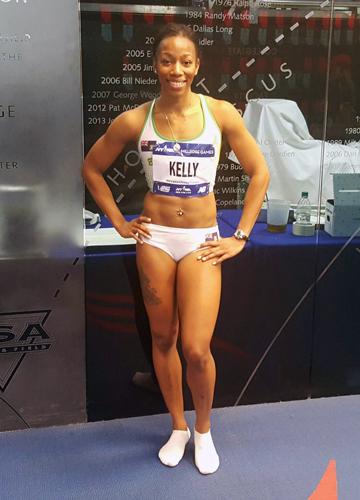 Ashley Kelly joined Tahesia Harrigan-Scott as the second British Virgin Islands female sprinter to dip under 7.40 seconds over 60m indoors, when she cut her personal best from 7.46 earlier in the season to 7.39, at the Millrose Games in New York on Saturday. The 400m specialist, coming off a personal best of 53.01 last week and a 23.69 in the 200m three weeks ago, finished eight overall.

In North Carolina, returning to her 800m roots, Lakeisha "Mimi" Warner ran 2 minutes 12.85 seconds to place third overall in the UCS Invitational in Winston-Salem on Saturday.

Tarika "Tinkerbell" Moses was third in her 400m heat and fourth overall in 55.81 seconds followed by Jonel Lacey in 55.88-her second successive race under 56.00.

Beyonce DeFreitas finished second in heat three with the meet's eight best mark of 57.52. Judine Lacey was second in the fourth heat with a 59.34 seconds time.

The quartet of Lacey, Moses, DeFreitas and Warner, won the 4x400m Relay with a time of 3 minutes, 46.46 seconds. It was the second best indoor mark by a Sprint Tech quartet following up on the 3:45.34 in Boston on Jan 29.

Rakeal Jack ran 51.94 seconds for second in his 400m heat, while Josh Hill was second in his section in 52.40. Valique Graham's 54.55 seconds time was the top mark in heat nine. Bassue clocked 53.18 to finish third in the fourth heat.

The Sprint Tech quartet of Jack, Hill, Brathwaite and Graham became the first BVI male team to run a 4x400m Relay indoors. They were second in their heat and fifth overall in 3:30.61.

South Plains College freshman Taylor Hill, competing in her home invitational, sped to 60 and 200m personal bests on Saturday. Hill ran 7.49 seconds to finish third in the 60m after recording 7.52 in winning her semifinal. She then topped the podium in the deuce with a 24.47 seconds run.

Central Arizona sophomore Tynelle Gumbs, won the Pima Indoor Classic Weigh Throw with a heave of 19.42m, to follow up on last week's Jr. College record of 19.70. Her series also included a 19.28 mark.

Lurching in second place after the third round, Eldred Henry edged teammate Hezekiel Romero by one centimeter to win the Shot Put with a 17.68m effort on his last attempt, after Romero took the lead with 17.67 in the fifth round.

Shaquoy Stephens was second in the Steve Miller Open 60m dash in Manhattan, Kansas, with a season's best of 6.93 seconds. He won his 200m heat in 23.16 to finish eight overall.

Long Jumper Chantel Malone wrapped up her European tour in Glasgow, Scotland, with a leap of 6.45 meter to place fifth overall on Saturday.