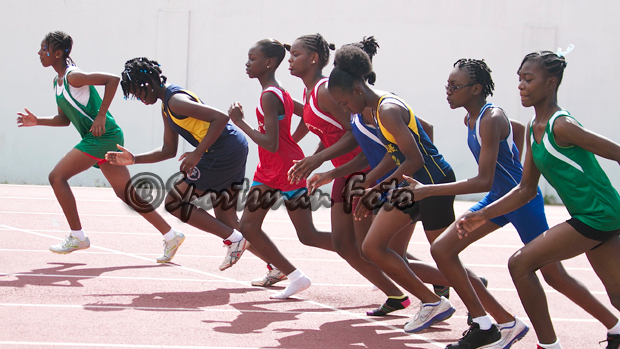 Jr. Girls at the start of their 1500m run, won by Marika Potter 2nd from right

MARCH 24—O’Neal—House 2—will take a 20 points lead over defending champs Flemming-House 3—into the March 28-29 Elmore Stoutt High School Inter-House Athletics Championships, where seven records fell during the pre-events that wrapped up on Wednesday.

Warner, who has been burning up the track, claimed her third National Record when she added her name to the 1500m mark, during Tuesday’s pre events to wipe Chantal Scatliffe’s 17-year old mark of 5 minutes, 09.9 seconds from the National Record books. She became the territory’s first female athlete to run under 5:00.00, minutes, when she crossed the line in 4:50.50. Her time also shredded Ereia Smith's Intermediate Girls, 1990 meet record of 5:19.0.

Warner’s National Record spree began on March 10, during the Carifta Games Trials/National Jr. Championships, when she improved her own 800m National Youth and National Scholastic Record from 2 minutes, 17.59 seconds to 2:13.30.

Inter-house sports day action is expected to begin at 9 a.m. on Wednesday with the opening ceremonies.