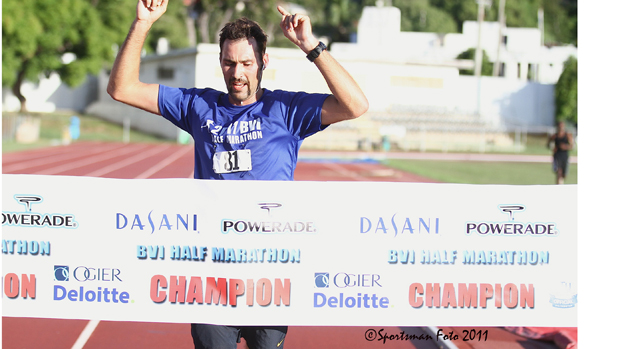 Adam Cole winning the 2011 BVI Half Marathon. Adam has since migrated and a new men's and women's champ will be crowned

OCTOBER 25—With a week remaining for persons interested in participating in the 7th Ogier/Deloite BVI Half Marathon to catch the Nov 1 early bird registration deadline, 20 persons have already registered for the Nov 17 event.

Registration costs $45 by Nov 1 and $50 there after. The race will begin at 6:00 a.m. at the A. O. Shirley Recreation Grounds and traverse Tortola’s south coast roads.

A new men’s and women’s champion will be crowned.

Organizers are expecting participants from Puerto Rico, St. Thomas and St. John as well as Trinidad and Tobago.

“The event has been growing and growing each year and last year we had 68 runners so 75 would be good,” said Road Racing Director Kay Reddy. “We have seven signed up from Puerto Rico, probably 10 from the U.S. Virgin Islands and we have someone from Trinidad as well as all the local runners so it should be some good competition as well.”

Fresh off finishing 230th among 11,000 runners in the Baltimore Half Marathon where she was 40th among women with a time of 1 hour 35 minutes and 08 seconds, Maria Mays is eying last year’s course record of 1:34.09 established by Meriel Steadman.

“I have four weeks to try and beat that,” Mays said. “So, I’m training hard.” Mays who won the Ceres Juices 10K Series days after Baltimore in 43:13, said it was a opportunity to get some speed work in.

“Fast runs are the hardest to make yourself do because of all the daily things,” she said. “This 10K was perfect timing for a speed run and I’m looking forward to the one on Nov 3, which will be my final speed run before the BVI Half Marathon.”

James Carr who won the 4th Ceres Juices 10K Series race last weekend, said his aim is to win it.

“I need to train for the Half Marathon,” he said. “It’s twice as long, different sort of training, but hopefully I’ll win that too. We’ll see what happens.”

Previous winners are as follows:

The awards will include the following cash prizes (in United States Dollars):