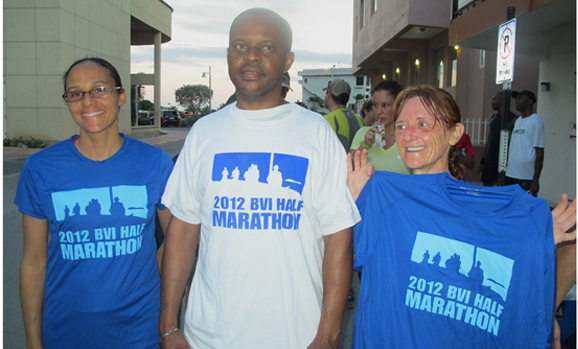 NOVEMBER 9—At the end of the Ceres Juices 10K Series on Saturday, Nov 3, officials launched the new logo for the Nov 17 Ogier/Deloite 7th BVI Half Marathon.

The logo is a silhouette of runners running along Slaney, on the way to Pockwood Pond on the BVI Half Marathon 13.1 mile route.

By Nov 1, 35 persons had already capitalized on the $45 early bird registration deadline. Those who now register through 7:30 p.m. on Nov 16 deadline, the cost is $50. There will be no race day registration.

The Oiger/Deloite BVI Half Marathon will start at 6:00 a.m. from the A. O. Shirley Recreation Grounds. The course will take runners up to Port Purcell Roundabout, down to Pockwood Pond and return for a finish on the track.

Runners from St. Thomas, St. John, Puerto Rico and Trinidad are expected to participate in the race.

Zebaln McLean, the 2011 Male Road Racer of the year who established a BVI National Half Marathon record last year, said some people should try their best to work up to the Half Marathon. He suggested starting with a walk, then a jog, competing in the 2 miles College Classic Series, moving to the Blenheim Trust 5K Series, then the Ceres Juices 10K Series and eventually, the BVI Half Marathon.

“When you finish the Half Marathon, you’re going to feel a great sense of accomplishment,” he noted. “It’s a good feeling knowing that what you thought you couldn’t do in the first place, you are able to do. And, it’s not going to be as difficult as you think it is.”

McLean pointed out that we are all working for a particular set of individual goals, but noted, if you don’t keep yourself healthy, you’re not going to see any of them. He said its really about maintaining your health for yourself, your children and for the ones who loves you and trying to achieve some of the goals you have set.

“If you are ill, what can you do? Noting,” he noted. “How much time does it really take to get out there and jog for a half hour, exercise for an hour. Studies have shown that each person should do some form of physical activity for at least an hour daily-so we can’t fall short.”

McLean said there are numerous problems plaguing us in the Caribbean—high levels of diabetes, hypertension and arterial sclerosis. “It’s all about the health,” he stated.