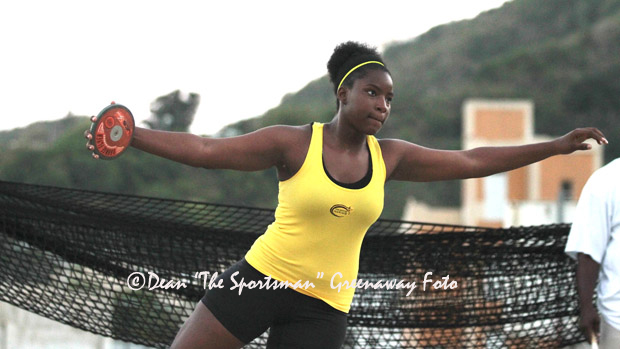 The competition named in honor of Tahesia Harrigan-Scott saw promising performances in the field—before power went—and on the tack when the lights returned.

Gumbs line up for a Sol National Record Breakers award, which will be doled out during the 5th BVI Athletics Association Gala, on Dec 28. An athlete establishing an indoor or outdoor National Record that stands at season’s end qualifies for the award.

Kala Penn—also of Top Notch Track Club—came within 15cm of the Carifta Games U17 Girls Triple Jump qualifying mark, when she cut the sand at 11.10m (36’5”).

Competition on the track was no different—except that winds over the allowable 2.0 meters per second robbed the females of Carifta Games and IAAF World Youth Championships qualifiers.

With Sprint Tech’s Taylor Hill moving to the U20 Girls division this season, the field is more competitive as she and Top Notch’s Shaian Vandenburg set the tone of things to come in the sprints. Hill ran a windy 12.08 seconds in the 100m to best Vandenburg’s 12.13, with Hill’s teammate Jonel Lacey—who ran 12.09 last year as an U17 performer—third in 12.38.

Already with a Carifta U17 Girls 800m qualifier to her credit, Sprint Tech’s Lakeisha “Mimi” Warner, added the 1500m to her repertoire, when she stopped the clock at 5 minutes 03.95 seconds.

The night’s male track highlight was Top Notch’s Mark Kendal stepping up to the 400m, after winning the 100m in 10.91. While all eyes were on Fast Lane’s U20 Boys Shaquoy “Tyson Gay” Stephens who opened with a 200m 21.89 personal best two weeks ago, and has gone under the 50 seconds barrier—Kendal, running on the inside corridor chewed up Stephens and the rest of the field early en route to a 49.15 seconds debut victory.

U17 Boys and Kendall’s teammate Deshawn “Fast Man” Douglas came within shouting range of the Carifta Games qualifier, when he finished behind Stephens’ 50.42 with his personal best effort of 50.79.

The next meet in the Gatorade Development Series is the Rose Phillips King Adams Classic on Feb 9. The meet begins at 10 a.m. Online registration will close on Feb 4.