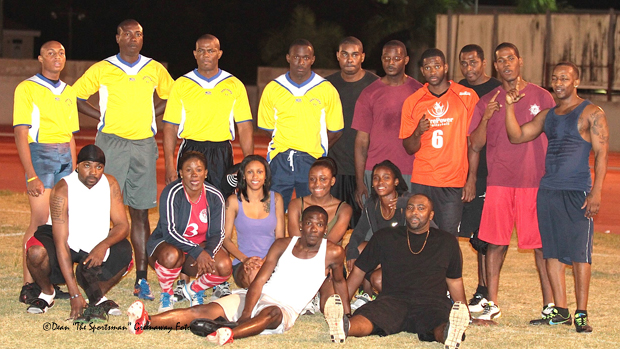 A large crowd gathered to see the public service teams in action—a new initiative by the BVI Athletics Association—that’s sure to catch on. Chief Fire Officer Zebalon McLean was at the starting line to give his boys the final pep talk and his B Team went on the win in 48.89 seconds, with HM Customs placing second in 49.51 edging the Police’s 49.84. Fire’s A Team finished in 51.09 while a female Softball squad ran 55.49.

Although it was a relay meet, the showdowns weren’t with the baton. In the U17 Girls 400m, Sprint Tech Track Club’s Tarika “Tinker Bell” Moses led three high school runners under 57.00 for the first time—the same trio that broke 60 two years ago—in the same order of finish.

Top Notch’s sprinter Nelda Huggins took the field out for the first 350, before Moses and her Sprint Tech teammate Lakesiha “Mimi” Warner overhauled her. Moses posted a season’s best 55.98 seconds from the 58.63 she ran earlier. Warner debuted with a personal best of 56.49, eclipsing her 56.52 mark from last year, while Huggings finished in 56.71, slicing her 2-year old best from 59.60. Their times qualified them for the IAAF World Youth Championships in the 100, 200 and 400m. Warner’s versatility will also see her making the mark in the 800m her primary event.

In the Under 17 Boys, with his main rival not toeing the line, Fast Lane Track Club’s Kyron McMaster decimated his 50.73 seconds previous best with a run away 49.36 victory, to become the second fastest Scholastic quarter miler and in range of the 37-year old record of 48.9.

McMaster’s mark not only qualified him for the Carifta Games, but also for the IAAF World Youth Championships in a second event, added to the 200m.

Sprint Tech Track Club’s L’Tisha Fahie chopped her U17 Girls 100m best of 12.49 seconds earlier in the season to 12.36 with a victorious effort—also under the IAAF World Youth standard of 12.45.

Taylor Hill also of Sprint Tech Track Club, won for the second time again her Top Notch Track Club counterpart Shaian Vandenberg, turning in a 12.18 seconds time to win the U20 Girls 100m. Her teammate Jonel Lacey improved her season’s best from 12.46 to 12.27 for second with Vandenburg third in 12.56.