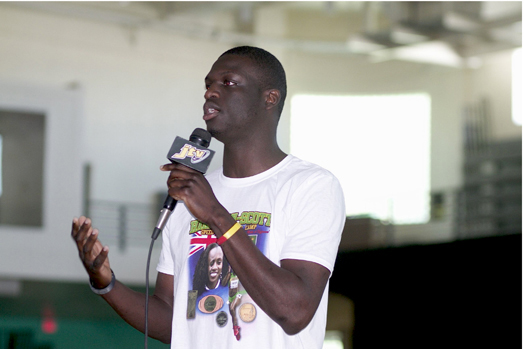 FEBRUARY 3—Fellow Caribbean athlete, London 2012 Olympic Games and Daegu 2011 IAAF World 400m champion Kirani James, underscored the importance of getting an education, when he shared his testimony with 76 young British Virgin Islands athletes during the Tahesia Harrigan-Scott Speed and Technical Clinic on Feb 2.

While underscoring education’s importance, James told the athletes to always surround themselves with positive people.

“The more you surround yourself with positive people, the better you’re going to become,” said James, the ninth fastest all time 400m runner with his 43.94 second time to win in London last year. He added that being around Glance, Phillips and Joey Scott, facilitates being humble, motivated and on the right track.

James, a business major at Alabama where Harrigan-Scott graduated in 2006, advised the young athletes to find a balance in their lives. He said they must have equal interest in school as in athletics. “You can’t go anywhere without a proper education these days,” said James who established the BVI All Comers as a 16 year old when he ran 46.85 seconds in the 400m here in 2008.

“I worked hard everyday, thinking that if I can do well enough in track, I could get a scholarship and get a proper education,” James pointed out. “ School is just as equally important as anything else in life. In this day and age, you can’t do anything without a proper education—not event to be a successful track athlete. It’s always good to be educated and know what you are talking about.”