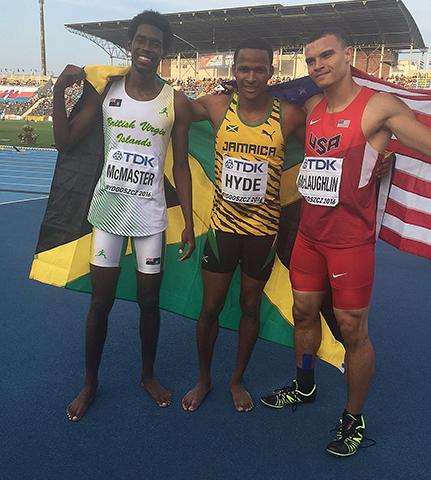 Kyron McMaster made history when he became the territory's first IAAF World Jr. Championships medalist in Bydgoszcz, Poland, on July 23

TORTOLA-After 30 years of participating, Kyron McMaster won the territory's first medal in its history at the IAAF World Jr. Championships, when he claimed 400m Hurdles bronze on Saturday in Bydgoszcz, Poland. The BVI has been participating in IAAF World Jr. competition since 1986.

The long striding McMaster placed third behind Jamaica's Jaheel Hyde who successfully defended his title in 49.03 seconds-becoming the first two times winner-and the USA's Taylor McLaughlin, who passed him just before the line for silver, in a personal best of 49.45 as he grabbed third place with a personal best and National Record, 49.56.

"Coming through the last three hurdles, I took a look at the field to see what position I was in and my intent was to stay in medal contention by any means and I prevailed with that," McMaster said. "I was in second until the last hurdle and couldn't feel my legs but at the same time, I had to keep mentally focused and run through it."

McMaster said he has been working hard since 2014 when he failed to get out of the preliminary rounds at the Youth Olympic Games.

Through early May, McMaster wasn't even thinking about World Juniors. As a student at Central Arizona and winning the Jr. Colleges Indoor 400m title in March, he turned his focus on competing in the Carifta Games but missed the meet and the outdoor season after Doctors told him not to run because of a lower back stress fracture.

"Not being able to compete outdoors, really affected me," he said. "When I came home, my coach (Dag Samuels) began working with me. We had a meeting and he said 'let's do this. Let's go World Juniors.' And I said 'coach, you know the situation.' At that moment, I couldn't run. Within a week, Coach worked on me, got me to the point where I could be able to train, then to the point where I could compete and then qualify, so he played an important role and I thank him for that."

Samuels said it was unfortunate that McMaster was unable to train properly or compete, even at a single outdoor meet, as he was plagued with excruciating pain between January and May.

"When he returned home, immediately we went to work. The first task was getting him healthy and while doing so, have him compete to achieve the qualifying standard for the World Jr. Championships," Samuels explained. "With that being accomplished it became a matter of TLC to his injury but at the same time enforcing the daily work and that was a crafty task. We knew that he was capable of running 49 but we had to be patient and wait. After the first round, we knew two things-he would medal and secondly he would run 49 and he accomplished both. Kyron is a talented but hard worker, a coach's dream. His goals are very high and he pursues his endeavor daily and with zeal."

McMaster said being out of collegiate competition affected him badly. If he had the chance, he would have come into the meet with a higher ranking. He said being released from Central Arizona-before being able to even compete outdoors-put him into a different zone where he had to strive and become more focused.

"People would say getting released from Central Arizona would have a negative impact, but getting released was probably the best thing because it showed me how to work, achieve my goal and don't take anything for granted," he said, noting that recruiters have been after him after easily winning his preliminary heat in 51.77 seconds followed by a 50.49 semifinal. "Getting the bronze medal and running 49.56 just seals the deal that a lot of people are after me. Off the top of my head, Florida, Georgia, UTEP, Nebraska and South Carolina have all shown interest so far."

McMaster and Grenada's Anderson Peters are the only OECS athletes winning World Jr. Championships medals-the first pair of males in the region to ever do so at the championships-after Peters grabbed Javelin Throw bronze with a personal best and national record throw of 79.65m.