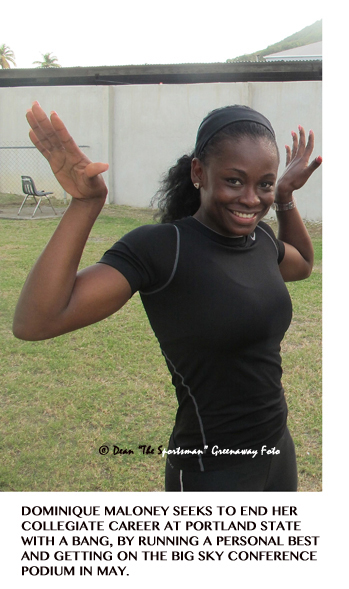 MARCH 7—With the indoor season behind her, Portland State Vikings Sr. Dominique Maloney now turns her attention to the outdoor season, which begins on March 16 at the Oregon Preview.

Reflecting on her recent silver medal at the Big Sky Conference Indoor Championships, Maloney said she was very nervous at the start.

“My 400m performance was the highlight of my indoor track and field career as a Portland State Viking,” she stated. “As this is my senior year, I felt like I had to leave something behind for someone to remember me.  After sitting in the stand and watching the 400m finals run without me at last year’s conference championships, it bothered me. I made it my goal that this being that it is my last year, I was not going to be sitting and watching from the stands but to be a part of the finals and to be on the podium no matter who's wings ill have to clip to get there.”

The 55.28 seconds was the fastest she had ever run in or outdoors. “I was extremely happy because it showed that all the hard work I've put in over the course of the summer and fall has finally paid off and with each run I can see the results,” she noted. “And I Thank God for that.”

“In my 200m, to be honest, I wasn't expecting to go as fast as I did and it shocked me because I was so focused on my 400m goals rather than the my 200m goals,” she explained. “However, I was extremely happy with my time and it pumped me up a bit because the thought that there was a possibility that I could medal in this event made me even more anxious to run both the 400m and 200m finals.  At the end of the day, I was extremely happy with my performances in both events because I ran personal bests in the prelims and finals and for that I can’t wait for outdoor season to being on March 16th in Eugene Oregon.

“Overall, I have achieved all of my goals that I set before the indoor track season started. I have broken my own school record and was on the podium and I lowered my time in my respective events.”