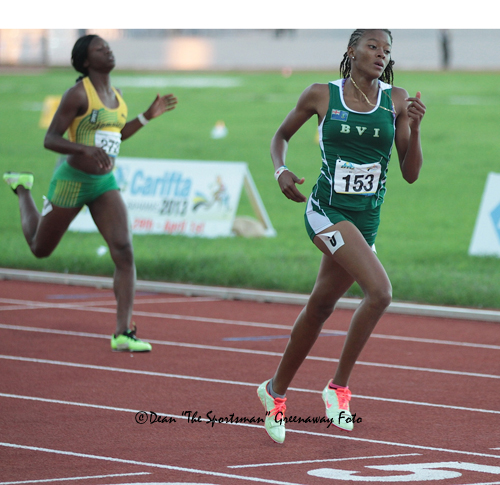 NASSAU, The Bahamas—Another chapter was added to the BVI’s Carifta Games historic ties to Nassau, The Bahamas, when the territory’s athletes bagged four medals on the opening day of the 42nd edition of the premier regional Jr. Track and Field Championships.

Sprinter Nelda Huggins capped off the day with an U17 Girls 100m silver medal, after Tarika “Tinker Bell” Moses notched U17 Girls silver in the 400m. Trevia Gumbs—in her first U20 Girls Shot Put competition—bagged bronze, to match the bronze Eldred Henry won early in the day.

Huggins sprinted to an 11.81 seconds personal best to finish third in her heat, advancing to the final, where she snatched silver in 11.94 seconds. She won silver last year and bronze in 2011.

The race also saw the U.S. Virgin Islands’ duo of Quashira MacIntosh and Nia Jack in the final—the first time that both territory’s had finalists in the same event at the Carifta Games—with MacIntosh placing seventh in 12.29 and Jack eight in 12.38.

L’Tisha Fahie had a non-advancing personal best time of 12.30 in her heat.

Moses added the day’s second silver medal when she ran 55.83 in the 400m final. She made last year’s final but was unable to run because of an injury.

Neither Shaian Vandenburg nor Taylor Hill advanced to the U20 Girls 100m final, after running 12.26 and 12.36 seconds in their respective heats.

On the boys’ side, after advancing with a personal best of 48.76 seconds, Kyron McMaster was fifth in the U17 Boys 400m in 49.29. In the U20 Boys equivalent, Khari Herbert placed sixth in 48.17, marking the first time that the territory had three 400m finalists.

Today’s competition schedule is as follows: