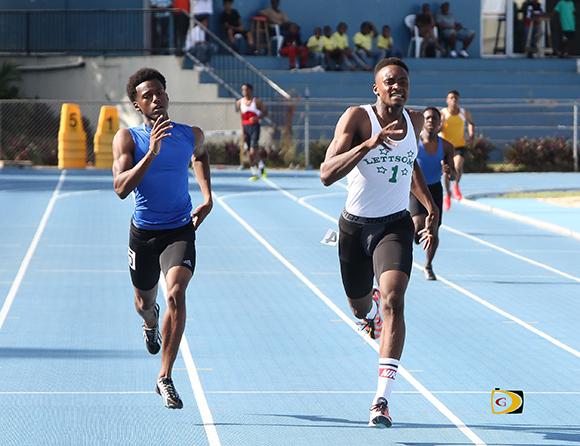 It was like David and Goliath. Flemming, the Elmore Stoutt High School House that has won 15 titles versus Lettsome House, the on with the least championships with eight, competing in the 47th edition of the event on Wednesday and Thursday at the A. O. Shirley Grounds.

Trailing Flemming House by 30 points after the completion of pre inter house sports day events, Lettsome House overhauled their nemesis to become the last of the four houses to win four successive titles.

In winning their ninth overall championship in the 47-year history of the competition, Lettsome amassed 938 points to Flemming's 894. Carlisle-the first house to win five successive titles between 1971-75, was third with 717 while O'Neal rounded out the competition with 437.

Ariyah Smith of Flemming House won the 13 and Under Girls Division with 50 points while O'Neal's Khybah Dawson tallied 46 for the Boys' crown.

Zara Brown of Flemming House had 44 points for the 15 and Under Girls Division victory while Jaleel Croal of Carlisle House finished with 42.

Lettsome House's Arianna Hayde won the 17 and Under Girls Division after amassing 46 points with Jelani Norman of Carlisle House garnering 44, for the Boys equivalent.

Lettsome House's Mya Walwyn had 40 points and claimed the 20 and Under Girls title, while Lettsome's Joshua Lynch and Carlisle's Akeem Bradshaw, tied for the 20 and Under Boys Division with 30 points respectively.

Flemming's Ariyah Smith with 50 points was the Victrix Ludorum and O'Neal's Khybah Dawson's 46 points earned him the Victor Ludorum.

Several Division records were established as well. Djimon Gumbs improved his 17.20m (56 feet 5½ inches) Shot Put effort from two weeks ago with a mammoth heave of 17.52m (57 feet 5½ inches) on his final attempt.

Carlisle House's Akeem Bradshaw, had a notable performance in the 20 and Under Boys 200m running a time of 22.21 seconds.