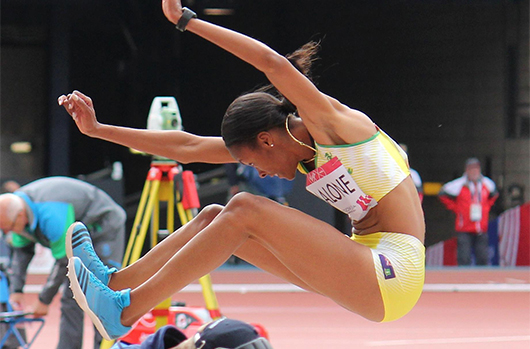 AUGUST 1—Chantel Malone had the best place finish by a BVI athlete in its history of Commonwealth Games competition when she finished fourth in the Long Jump on Thursday night as the territory’s athletes wrapped up competition in Glasgow, Scotland, in the XX editing of the event.

Malone opened with a leap of 6.41m that had her in third place for most of the competition before England’s Jasmin Sawyers leapt 6.49m to move her down a notch. Sawyers would leap 6.54m on her final attempt to earn silver.

Sprinter Ashley Kelly was fifth in her 200m semifinal heat in 24.00 seconds but did not advance. Karene King ended her season with a time of 24.67 in eight place.

Already a 400m semifinalist, Ashley Kelly will go down as the territory’s first athlete advancing to the semifinals in two events, after grabbing an automatic spot in the 200m, with a third placed time of 24.40 seconds. She ran 54.35 in her 400m semi after a 54.26 time to advance.

King joined Kelly in the 200m semis after placing fourth in her heat in 24.22 seconds, advancing as one of the six qualifiers based on time. She ran 11.93 in her Games debut in the 100m.

The XX Commonwealth Games marked the first time that the BVI has had a finalist and three semifinalists in the competition in its history.

Eldred Henry, who competed in the Shot Put earlier in the competition, fouled his first two attempts in the Discus Throw, before recording a non advancing mark of 51.39m.

In his Games debut, Henry had the third best throw of his career in the Shot Put to place 9th in Group A qualifying rounds, with a heave of 17.08m, but did not advance.

He will end his first season as a senior athlete competing in the NACAC U23 Championships in Kamloops, Canada, Aug 8-11.