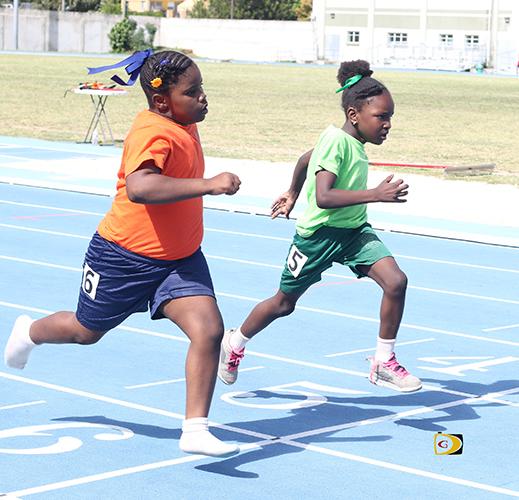 Competition was fierce in all age groups of the B Division Championships PHOTO; Dean "The Sportsman" Greenaway

Led by Victrix Ludorum K'Zariah Harrigan, Alexandrian Maduro reclaimed the Inter Primary Schools B Division crown on Wednesday afternoon at the A. O. Shirley Grounds, winning for the first time since 2013.

Joyce Samuel who moved to the A Division this year, was the defending champ.

In the division championships, Harrigan secured the 13+ Girls Division with 28 points, two better than Leonora Delville's Erieana Bobb's 24. D'Naesia Springette of Alexandrina Maduro, gave them their second of the four division titles as stake, winning the U13 Girls class with 26 points, while Leonora Delville's Natalia Drayton claimed the U11 Girls Division with 26 points, two better than Jost Van Dyke's Laila Penn. Shyann Tomlinson of Claudia Creque had 20 points for the U9 Girls Division title.

Isabella Morris' Malaki Smith won all his events to claim the 13+ Boys Division crown with 30 points. Shakari Maduro of Alexandriana Maduro, was the U13 class winner with 24, while Robinson O'Neal Memorial School's Sean Samuel won all his events for the U11 Boys title with 30. T'Sean Smith of Lenora Delville, had 26 points to win the U9 Division.