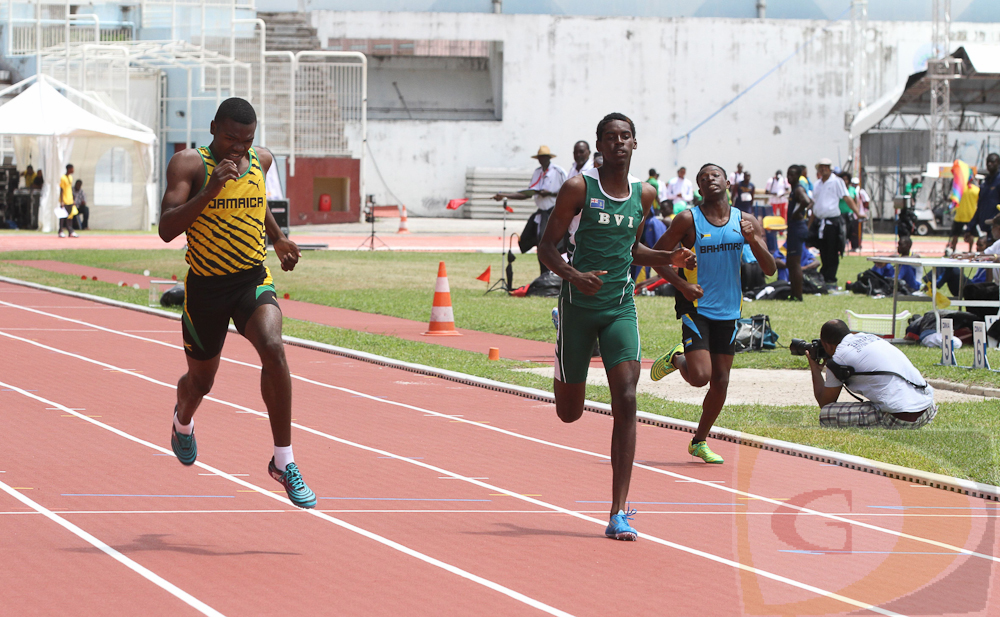 JANUARY 12—Fresh off establishing a 400m National Scholastic Record last year and being the only male athlete qualifying for the 8th IAAF World Youth Championships, Kyron McMaster made his 400m Intermediate Hurdles debut and established a National Youth Record, as the 2014 BVI Athletics Association Development Series kicked off on Friday evening.

McMaster of Fast Lane Track Club, a 2013 Carifta Games 200 and 400m finalist, ran the U18 Boys race in 56.31 seconds to pick up another Scholastic Record in the process.  He becomes just the fourth BVI athlete to have ever broken the 60 seconds barrier in the event, which has not attracted many athletes.

Sprint Tech Track Club’s L’Tisha “Lea” Fahie dropped the fastest 100m time of the night in the U18 Girls Division when she stopped the clock at 12.16 seconds—a new personal best in the event that had a +0.6 wind reading. She lowered her best from 12.24 to end her season during last year’s Leeward Islands Jr. Invitational.

St. Thomas’ Ateniah Roacher of the Cheetahs Track Club overpowered early leader Akeem Bradshaw from Top Notch Track Club to win the U18 Boys 800m in 2 minutes, 04.52. Bradshaw turned in his fastest season debut in 2:09.32. His teammate Tarique “Tweety” Moses began his season with a 2:02.75 time in the open race.

The day’s competition opened when event newcomer Niaylia Smith of Fast Lane, twice recorded Triple Jump leaps of 10.76m (35’3½”) in the U20 Girls Class for #10 on the All Time List.

Athlete registion is $2 and Admission is $3.