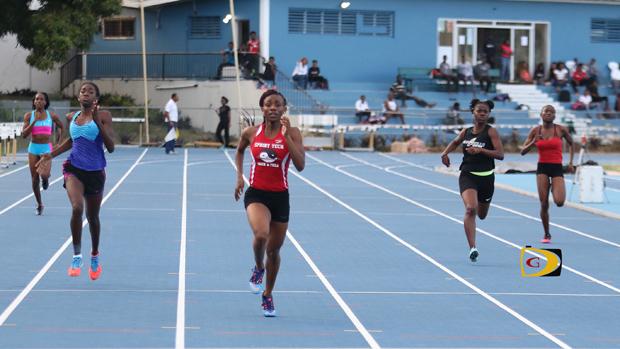 Judine Lacey wins the 400m in a personal best of 55.92 seconds after running 56.04 in the prelims. PHOTO. Dean "The Sportsman" Greenaway

Djimon Gumbs put the disappointment of fouling out the Discus Throw during the morning session behind, by unleashing a National Youth Record throw in the Shot Put, to close the BVI Athletics Association National Jr. Championships on Saturday, which was highlighted by several personal best performances.

Gumbs-who also took the Javelin Throw with a 42.02m effort-upped his own record mark from 15.58m earlier in the season to 16.33m on his first throw of the evening session in the U18 Boys event.

Judine Lacey became the ninth BVI female athlete running the 400m under 56.00 seconds, when she took the final in 55.92, improving on her 56.04 in Friday's prelims. Anguilla's Artesha Richardson established a national record of 56.74 seconds in placing second.