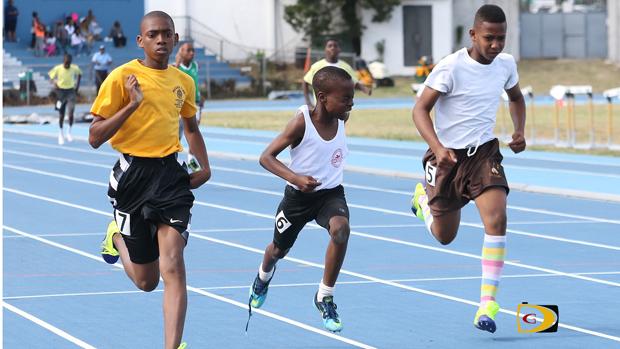 There was stiff competition during the Inter Primary A Division Championships PHOTO: Dean "The Sportsman" Greenaway

While perennial champs Althea Scatliffe continued its dominance of the Inter Primary Schools A Division Championships, there was seismic shifts among the pursuers.

Unlike a year ago when "the Mighty Scatliffe" was only able to secure just the 13+ Girls sprint crown among boys and girls and found themselves in the unusual position of trailing, this time they got strong production in the U9 and 13+ Divisions, to amass 428 points-58 more than last year.

Francis Lettsome moved from third to second by holding off the charging Virgin Gorda's Bregado Flax-who jumped from seventh to third-by four points, 283-279.

St. Georges placed fourth as they did last year with 237, while Enis Adams dropped from second to fifth after amassing 216 points. Willard Wheatley dropped two spots to sixth and finished with 205, while Ebenezer Thomas slipped a spot to seventh with 165. Cedar rounded out the competition with 22.

There were a series of close battles for the eight division titles at stake. Althea Scattlife's Tamri Thomas edged Bregado Flax's Makeda Daniel by a point for the U9 Girls Division title, 26-25. Althea Scatliffe's Tiondre Frett easily secured the Boys Division.

Jahtivyah Williams was two points better than Enis Adams' A'Keela McMaster to take the U13 Girls title with 20. Kyron Walwyn of St. Georges was the run away winner for the Boys segment after securing 30 points.