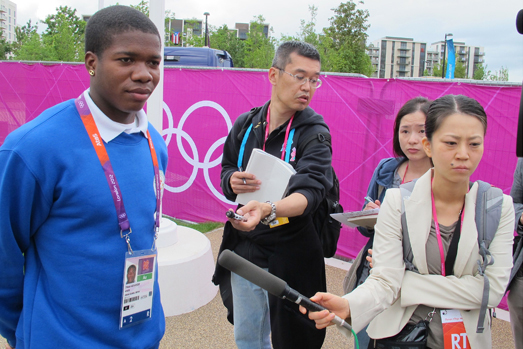 As he is entered as an unqualified male athlete, he will run in the preliminary rounds of the 100m from lane 2 of heat 3 this morning. The first two finishers will advance to the heats to race against those who have met the A and B qualifying standards.

Prior to coming to London, Alexander competed in the IAAF World Jr. Championships in Barcelona, Spain, producing a time of 10.80 seconds. He has a season’s best of 10.56.

“Training has been going good, the temperatures have been rising and I feel lovely like I’m ready to run,” said Alexander who ran I Wales on July 18 and had a time of 11.01 in cold, windy and rainy conditions—a race that had a -3.5 meters per second headwind. “Apart from Wales, the temperature has gotten better and I’ve been able to acclimatize. Since that race, I’ve been focusing on my start and my transition phase of the race, because those are the weak spots in my race. Since coming to camp here, that has been my focus, working on my strength and keeping my body on a good level.”

The 19 year old said the pre games camp was helpful. “If we didn’t have a camp and came straight to the games, we would have had to do a lot of work,” Alexander pointed out. “The camp helped to better prepare, get physically stronger and get accustomed to the weather before the games.”

His coach Winston Potter, said since competing in the Welsh International in Wales, they have worked feverishly on his start and getting him to run more efficiently through his transitional phase and into his finish.

“I think he’s a lot more fluent coming from the blocks,” Potter noted. “I just hope there’s no nerves and he’ll false start and I’m looking forward to some good times.”