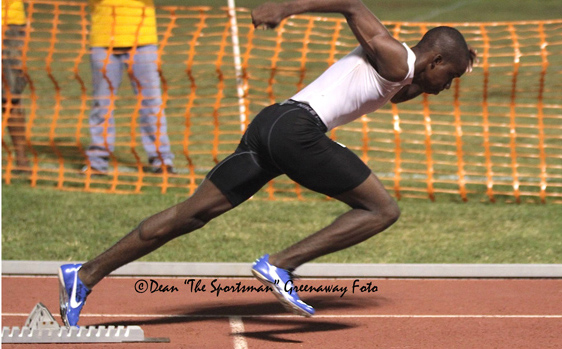 The BVI Athletics Association for the first time, held the meet focusing on Pentathlon and Heptathlon events in preparation for the June 29 & 30 CAC Age Group Championships in Curacao. The meet was last held here in 2011. The competition also attracted participants from St. Thomas and St. Croix, exposing the two territory’s athletes to the rigors of their events and also seek marks for the Carifta Games.

But, it was in the open events that saw the real fireworks. Huggins, 16—a 2012 Carifta Games U17 Girls 100m silver medalist and a 2011 bronze medalist—began her day by equaling Britney Wattley’s 5-year old 200m National Scholastic Record, when she stopped the clock at 24.55 seconds into a -2.5 wind, shaving .02 off her best.

The Top Notch Track Club athlete then ran 12.05 in the 100m for the double, pulling the Sprint Tech Track Club duo of quarter miler Tarika “Tinker Bell” Moses and half miler Lakeisha “Mimi” Warner to personal bests of 12.40 and 12.41 respectively. The Sprint Tech duo had the same order of finish in the 200m running 25.26 and 25.35 respectively, behind Huggins.

Another budding rivalry In the U17 Boys 200m, saw Top Notch Track Club’s Deshawn “Fast Man” Douglas” avenged an opening loss to Fast Lane Track Club’s Kyron Mc Master, when he broke the tape in 22.69, edging McMaster by .03 in 22.72.

Douglas sliced his best from 22.98 when he lost to Mc Master who ran 22.68 on Jan 12. Both have now met the IAAF World Youth standard—marking the first time that two athletes had pulled off the feat—no less in the same race.

Douglas returned to snatch a 400m victory in a personal best of 50.28, eclipsing the 50.79 from his season opener. His mark is .28 off the Carifta Games standard.

On the field, U17 Girls, Kala Penn and Ashley Penn—no relation—recorded personal bests and shifted the All Time marks in the event as they qualified for the Carifta Games.

In the Boys 13-14 Heptathlon, St. Thomas’ Amed Joseph tallied 3112 points in six of the seven events as they skipped the Ball Throw, for the highest score. Rackeel Jack amassed 2691 and St. Croix’s Lamar Miller, 2661.

The Girls Pentathlon saw Ashley Penn scoring 2317 points. Ashley Marie McCall’s score was affected after amassing 1802 while pulling up lame in the 800m. Shanakay Wheatley had 1224 points in her first attempt at the discipline.

Next up is the Gatorade Development Series is the Johnny Hassan Relays on Friday, Feb 22. Online registration closes on Feb 18. In addition to battles between the clubs and schools, Fire and Rescue, Customs, Immigration, Police and others as well as the Battle of the Associations will feature 4x 100m Relays. Competition will begin at 5:30 p.m.