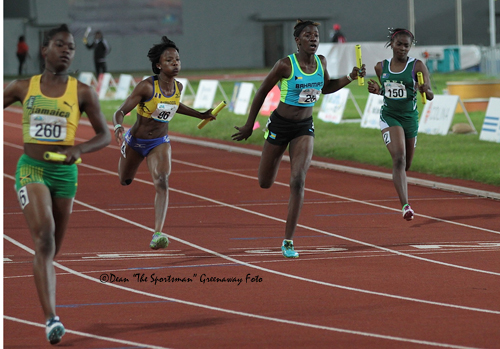 NASSAU, The Bahamas, April 1—After fourth and fifth placed finishes in the U17 Girls 4x100m Relay and the U17 Boys Shot Put, the BVI will begin its drive for more medals on the final day of competition in the 42nd Carifta Games here in Nassau, Bahamas today.

Lakeisha “Mimi” Warner, Nelda Huggins, Kyron McMaster, Eldred Henry, Tynelle Gumbs and the U17 Girls 4x400m Relay quartet will all be in action in their respective event finals. With the addition of Huggins and Mac Master, 9 athletes have qualified for finals in the competition so far and 10 have recorded personal bests.

The U17 Girls team of Tarika “Tinker Bell” Moses, Lakeisha “Mimi” Warner, L’Tisha “Bella” Fahie and Nelda Huggins, placed fourth overall with the #6 time ever run by an U17 team of 47.14 seconds.

On the track, Huggins won her U17 Girls 200m heat in 24.77 seconds, advancing to her second straight Carifta final in the event. She was third last year but was disqualified for stepping on the line and will be seeking redemption tonight.

McMaster became the first U17 Boys 400/200m finalist when we grabbed one of the two automatic spots in the deuce, after stopping the clock at 22.70 seconds.

Tarique “Tweety” Moses ran a personal best of one minute, 58.05 seconds in his 800m heat but did not advance to tonight’s final.