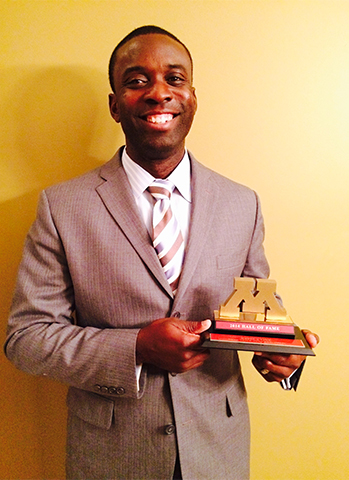 OCTOBER 15—From running on the beach in Cane Garden Bay, in the school yard, through Inter Primary and Inter-House sports, he became a two times Olympian.

“I didn’t know I was up for nomination as whoever is on the card for that year isn’t made public so I really didn’t know,” he said. “It’s considered a real honor. These things are permanent. This a legacy and you have now been etched completely in a part of history regardless of who breaks your records or who might come along. That’s something to know that they have made you permanently or even more so, part of their history and culture in athletics.”

“My most honorable achievement is competing for the BVI at the ’96 Atlanta and 2000 Sydney Olympic Games,” he said. “My Jr. career representing the BVI was a good one and everything that came around started there on the island—from sports day to racing on the beach to Commonwealth Day—everything has led ultimately to this. It’s a great reflection and takes you a step back to show what your have been able to accomplish and you take some solace in that,” he added. “I can’t jump 26 feet anymore, but I know what I’ve done have made a mark on a number of folks.”

Cline said he’s happy with his accomplishments and is excited for what he can do to help BVI athletes.

His advise to young people seeking scholastic opportunities? “Go for it but understand what the requirements are and there are lots of folks around who can help,” he noted. “But at the same time, there is no substitution for hard work persistence and a continued focus on what you want—you can’t get away from it and there are sacrifices that have to be made.”

Cline said while an athletic scholarship is good and you get a free education and everything that comes with it at whichever level of NCAA competition or even the World Championships and Olympic Games levels, as one goes through the experiences, he advises not to ignore the people around you especially in international competition across the region and beyond.

He said these are people you can form lifelong relationships with down the road because at some point you’re going to have to walk off the track. “These are the people you are going to be interacting with and networking with don’t ignore that,” he advised. “You could have friends in Germany, friends in Italy, friends in Greece, friends in Guadeloupe, friends in St. Martin, people that can help you, can influence you, people you can turn to for whatever the reason might be. It’s easier now with all the technology that we have so don’t discount those friendships,” he added.

He said don’t just sit around and say ‘I’m here with BVI’ but get the experience from collegiate and other competitions. “It’s all starts by pounding the pavement and getting out there and doing the work,” he said.

Cline thanked all his fellow athletes, coaches and administrators—many too numerous to mention—who he said can take pride in his Hall of Fame induction.