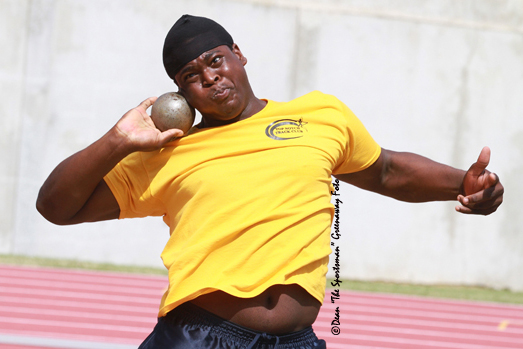 Elsewhere, Carifta Games U17 Girls Javelin champ Tynelle Gumbs missed her National Record by .03 centimeters, while Shaquoy “Tyson Gay” Stephens, led other personal bests to win the U20 Boys 200m by dipping under 22.00 for the first time.

“My performance didn’t go as I wanted it, but I still had a good outcome,” Henry said. “I was looking for something close to an 18m throw, because in the off season, I threw close to 19. I believe my warm up affected my throwing. I’d warmed up early and cooled down and the mindset probably wasn’t really there at that moment, but, seeing that my throw was from a standing position, I think I can hit my goals—I just have to work on it.”

Henry became the first athlete to line up for a Sol National Record Breakers award, which will be doled out during the 5th BVI Athletics Association Gala, on Dec 28. An athlete establishing an indoor or outdoor National Record that stands at season’s end qualifies for the award.

On the track, Top Notch Track Club’s Carifta Games Nelda Huggins—last year’s U17 Girls 100m silver medalist—led the parade of 200m performers to the tape, when she crossed the line in 24.98—her fastest opener with a +1.4 breeze.

Gumbs of Top Notch Track Club—who moved up to the U20 division this year— began her series with a 36.71m flyer with the 600g spear, just off her 36.74 best from last year. She also collected an 11.52m personal best in the 4K Shot Put.

After her first throw, Gumbs said her technique was off and her run up was too far back. “That’s why I couldn’t get maximum distance, so, I’ll have to fix that during my training and see what happens after that,” she explained.

The next event in the Gatorade Development Series will be the Tahesia Harrigan-Scott Classic on Friday, January 25. Competition begins at 5:30 p.m.