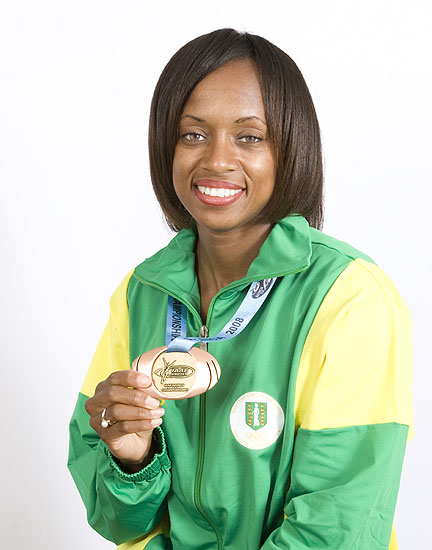 MARCH 5—When Tahesia Harrigan-Scott climbed the podium to collect her bronze medal during the 2008 IAAF World Indoor Championships in Valencia, Spain, with a population of under 30,000 inhabitants, the British Virgin Islands became the smallest of the 211 IAAF members, whose athlete had a podium finish in any of the World Championships Series events.

She was the only 2008 IAAF World Indoor Championships finalist who also made the championships final in 2010 where she finished seventh in 7.17 seconds—a time she matched on Saturday in Berlin, in her tune up for this year’s event that opens on Friday, in Sopot, Poland.

Ironically in 2010, her only races were the prelims, semis and finals of the World Indoor Championships as she only confirmed her participation two days before departure because injuries had curtailed her indoor season.

The British Virgin Islands double national sprint record holder said her preparations have been going extremely well and she has been doing a good job in terms of recovery. She said that she has been able to get the intensity which has been factored into her program to help prevent the injuries she has been experiencing. “I just want to go out there and run a healthy race and a clean race, and I know some spectacular things will happen,” she stated.

Harrigan-Scott who has a 7.09 seconds 60m personal best, says it has been difficult trying to overcome the injuries. She said the injuries have been mentally frustrating and completely impacted her races.

“I am not an 11.9 seconds runner,” says Harrigan-Scott whose personal best is 11.13. “But when I get injured, for some strange reason for me to get out of that bracket, it’s hard because I’m struggling against my mind and my physical limitations. When those things are not hand in hand, I have some issues.”

In the offseason Harrigan-Scott said she sat with her husband and coach Joey, they came up with a strategy because everyone who has worked her knows she’s a hard worker. She said because of her hard work she had a tendency to do another run instead of saying she had three good runs for example and shut it off because her body is tired and you don’t want to injure yourself. “As you get older, you have to look out for your body and listen to it, and I had a tendency of not listening to my body when it needed attention,” she pointed out. “Right now, I focus on my heart rate and if it’s higher than it usually is, I don’t train because that’s an indication that my body is shutting down and I need to work on recovery and do some light stuff. So, all of these things are being taken into consideration this year.”

What would it mean for her to qualify for World Indoor finals for a third time?  “I would be happy,” Harrigan-Scott admitted. “For me to be in the final would be something great. I expect to be in the final and I expect to run well and once I get in that final, I want to be on that podium, that’s my goal and I want to run a good race. Even though I’ve been running 7.2s, I don’t think I’ve run to my capabilities this year,” the 32-year old said. “My last two weeks of practice have been a good indication of what I can run and what I should run so its just to go out there and be patient, stop rushing the phases, go out and have an excellent meet.”

Harrigan-Scott said from all indicators—strength, fitness and technical aspects of her race—she’s way ahead of where she was when she won the 2008 bronze medal. “That’s the thing that has baffled me,” she noted. “I’ve done a great job of messing up all my races this year, but the comfort level is actually clicking. I haven’t competed in so long that when I compete, every race feels different so, it’s all about the rhythm. It feels like its here and I was using Berlin to tell me what I should be doing at Worlds. It was to let me know what I need to correct to be on the podium.”