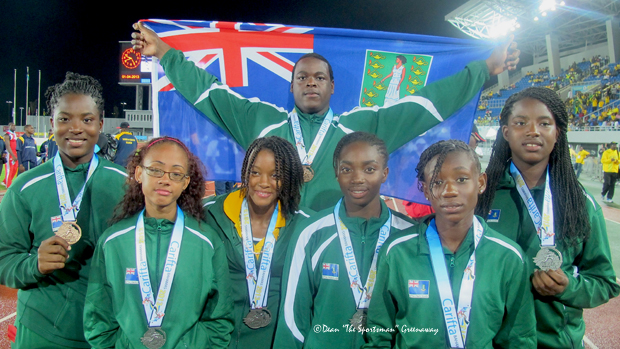 NASSAU, The Bahamas, April 2—Judine Lacey passed the Bahamas’ U17 Girls 4x400m Relay anchor leg in the last 50m, to give the BVI its fourth silver and record eight overall medal, to close out the 42nd Carifta Games in Nassau, Bahamas on Monday night, solidifying the territory’s historic ties to the archipelago in the championships.

The BVI has won 33 medals in the championships since its first in Nassau in 1978—where 11 of the medals have been won.

The day began with Warner earning bronze in the U17 Girls 800m, with a time of 2 minutes, 12.71 seconds, matching the one she earned last year in Bermuda.

Then, after fouling her second attempt, Tynelle Gumbs unleashed a throw of 35.74m (117’3”) to claim U20 Girls Javelin Throw silver.

Eldred Henry—who jumpstarted the medal count on Saturday morning with an U20 Boys Discus Throw bronze, exploded with the Shot Put, heaving the 6K ball out to 18.01m (59’1¼”) a National Jr. Record, eclipsing the 16.99m he used to open the 2013 season.

In all, the BVI athletes competed in 17 finals, recorded 10 personal bests and established two National Jr. Records and one National Youth Record, for its best Carifta Games performance in its history.