Tahesia Harrigan-Scott competes in the heats this evening, after receiving a bye in the preliminary rounds 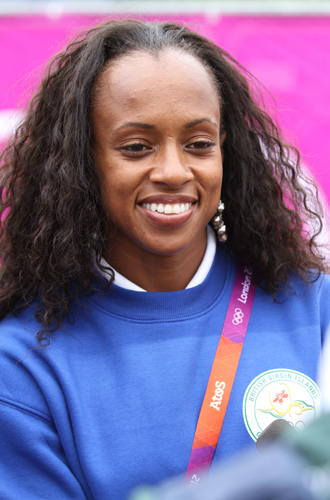 LONDON, August 3—When she steps on the track on this evening to face the starters gun, sprinter Tahesia Harrigan-Scott will become just the fourth BVI Olympian to compete in successive Olympic Games.

By virtue of having an A standard 100m qualifying mark, she has an automatic bye to the heats that starts at 2 p.m. Virgin Islands time, with non-qualifiers competing in this morning’s preliminary rounds, battling for a spot in the heats.

The territory’s 100/200m standard bearer, isn’t a fan of the new measure being introduced.

“Personally, I don’t like it,” she said. “We are all at the Olympic Games and we should all be doing the same thing. If you are going to accept that a country can bring one person, then you should put all of us together and let them experience running against other athletes they are hoping to see.”

Harrigan-Scott added that if they don’t do well in that preliminary   round, they won’t be in that environment where they are looking up to some athletes and would like to get that experience.

“If everybody has to run four rounds, then don’t make someone who might potentially do well in the first round because they didn’t have the qualifying standard and then put them into the second round, because you take out of the picture and give them an extra round that they shouldn’t be running,” she explained. “If everybody is going to run four rounds, let everybody run four rounds as opposed to putting that person on an uneven ground.”

With the competition task at hand, Harrigan-Scott said her preparations have gone well since coming to England on July 9. She said things were going extremely well very early in the year until she was injured in early February, and has been shaky since then.

“But, other than that, I guess I started off rough, so I’m going to finish better than I started, she noted. “So, it’s not how you start, It’s how you finish,”

Since competing in Wales in cold, damp and rainy conditions on July 18, Harrigan-Scott stated that over the last two weeks, things have been going well especially with her rhythm and being efficient during her runs.

“I’m having fun right now,” she revealed, admitting she was frustrated a bit from the injury. “I had been training well, then got into a race and doing something you aren’t expecting to do. But, I’ve been feeling more consistent, so I’m going to use that going into the Olympic Games.”

Unlike Beijing four years ago, Harrigan-Scott was in a pre Games training camp here, which she described as a ‘good thing’ since she trains in Miami, where its always hot as opposed to the English weather where several seasons can be experienced in a few hours.

“To actually come from hot Miami to where you have to deal with the weather, it was a great idea to have a camp for us to come over earlier and get acclimated,” pointed out. “Usually, when you come to a games or a meet and the weather is different, you have a tendency on focusing on it’s cold, or the weather is this, or the weather is that. But, when you have been here for a while it’s part of the game and you can focus on the things you need to focus on and the weather doesn’t make a difference, because everybody has to compete under the same conditions. So, you’ve been here for two weeks, your body feels fresh and you’re ready to perform.”

Coach and husband Joey Scott, said she has been acclimated and is now finding her rhythm a lot better.

“At first we weren’t able to do high intensity sprinting, but because we came over early, it gave us an opportunity to put her body through that high intensity sprinting, that way she’s able to find her rhythm a lot better,” he noted. “I’ve seen her getting a lot mentally stronger after her performance in Wales in bad conditions—where everybody had bad conditions. One of the things in that happened in that race was a lot of technical mistakes and that’s all that we have been focusing on—teaching her muscle how to act as it did last year. So she has done a great job of acclimating to the high intensity sprinting, she’s finding her confidence back and I think she’s going to be a lot more confident going into the race and I think there are going to be some good things coming out of that round.”