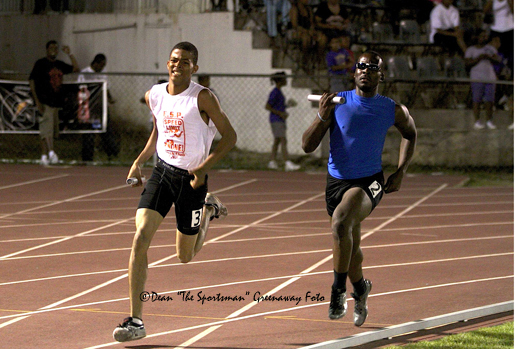 Competition kicks off at 5:30 p.m. at the A. O. Shirley Recreation Grounds. Admission is $3.

The TMM Track Club’s athletes—16 of whom are in the U20/Open Division will contest the 400m and eight of them will also run the 100m and participate in an A and B Sprint Medley Relay. They will be joined by Virgin Gorda’s Raw Skillz, Tortola based Fast Lane Track Club, Top Notch Track Club, Sprint Tech Track Club and ESP Track Club.

“We need competition, because we don’t have a track in St. Thomas,” TMM Track Club’s coach Bruce Smith—a regular horse racing commentator said. “We’re coming off the Agricultural Fair meet in St. Croix over the weekend. I’m turning my guys loose because we are gearing up for the Poly Relays in Puerto Rico in two weeks, so I need to see my teams.”

Apart from the relays, the U17 Girls 400m is expected to be a fast race. Half miler Lakeisha “Mimi” Warner—who has already ran 2 minutes 17.10 seconds over the 800m and a personal best of 12.41 over 100m will make her debut in the event along with her Sprint Tech Track Club teammate Tarika “Tinker Bell” Moses. Moses ran 55.62 last year and Warner 56.62.

The Under 17 Boys equivalent, will see Deshawn “Fast Man” Douglas, leading the chase to get under 50 seconds for the first time, after running 50.28 seconds in his last outing.

Next up is the March 1 Rey O’Neal Fast Times—the last event of the Gatorade Development Series. Competition begins at 5:30 p.m. Online registration is opened through Monday, Feb 25.

Registration for the March 8-9 National Jr. Championships/Carifta Games Trials, opens on Feb 26 and runs through March 4.