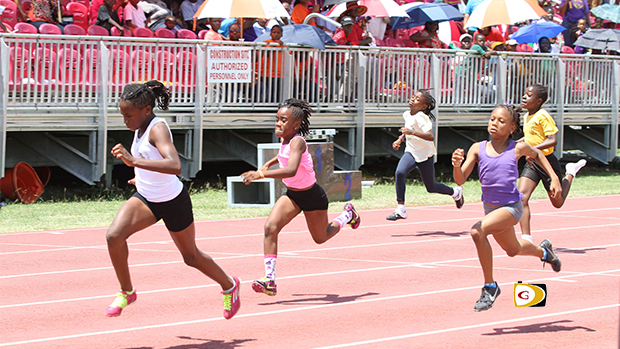 All athletes in the competition advanced during zonal competitions towards the end of February, where the top two athletes and the fastest losers from across zones advanced to the marquee event.

While Althea Scatliffe was expected to be at the top of the pile where they accumulated 554 points, there was a three-way battle for the next three positions and other tussles down the pecking order. Alexandrina Maduro used a higher  relay placing to finish two points ahead of Francis Lettsome, 218-216, with Joyce five back. Willard Wheatley scored 166 points, two better than St. George’s 164 for fifth place.

First Impression showed well in the relays to pull away from Seventh Day Adventist, 66-59, while Bregado Flax had a two point edge over Agape Total Life Academy, 53-51.

Another battle for the other positions saw three points separating Isabella Morris from Jost Van Dyke, 43-40 and Pelican Gate was just three points back with 37 while Claudia Creque fell two points shy of their score with 35. God’s Cornerstone and Robinson O’Neal tied with 30, two more than Cedar’s 28 with Little Rainbow School garnering four points.

With athletes limited to three individual scoring events plus the relays, there were narrow victories and ties.

St. Georges School Izariah Freet—the meets Most Outstanding Female Performer—was the only athlete scoring 30 points. She won the 80/150m in 11.66 and 21.68 respectively, then was the only Long Jumper cutting the sand over the 4 meter mark with a leap of 4.05m.

The 13+ Girls and Boys Divisions saw razor thin victories for both girls and boys winners. Enis Adams’ Leanne Connor 23 points was one point better than Francis Lettsome’s Anasha Fergus and Alexandrina Maduro’s Ericca Charles who were tied with 22. After losing the 100m to Ebenezer Thomas’ Brittany Williams, with 13.49 seconds vs 14.45, Connor overhauled Williams in the last 15m to win the 200m in 29.41-29.67.  Chares was third in 30.60. Connor reached 3.68m in the Long Jump, good for fourth place, behind Charles’ winning mark of 4.02m.