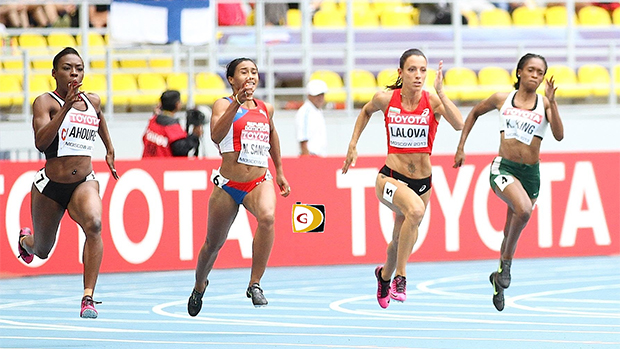 MOSCOW, Russia—The weather in Moscow, Russia was to Karene King’s liking—like her training base in Portland, Oregon, where she prepared under the watchful eye of Ronnye Harrison—who took her from a 25.34 seconds runner when she arrived to 23.24, to qualify for the 14th IAAF World Championships.

Her warm up for her debut 200m race went great—she felt loose and ‘stretchable’ than got the call to enter the call room.

It was about to happen—everything she had prepared for.

“Then, I got a little nervous and that could be one of the reasons or issues—I got a little nervous a little too late and didn’t have time to control my nervousness,” King reflected, after running 23.97 seconds. “The race did go as planned, but it has been a learning experience. I didn’t get out like I needed to, really can’t say what happened—it just didn’t happen on this day.”

Racing against the world’s best is a great experience King said, noting it’s something she said that she wanted. “Meaning, I want the time to cry—good cry. I want that time to see my flag raised. I want that time on the podium,” she expressed. “But, everything happens in God’s time. I just have to hold on by faith and wait for that time to happen.”

It was King’s best season, one she said that started a little rough.

“I’ve been to a place I’ve never been to, which is the World Championships. I’ve run the fastest I’ve ever run. I’ve been more consistent this season—so this season has been great,” she pointed out. “It was better than last season and I can say, it’s coming better and better for me.”

Despite making it to track and field’s marquee event, King is not satisfied. She’s hungry and wants more.

“I’m grateful and thankful for it, but there’s no such thing as just laying back and saying, ‘oh, I’m just going to go through the first round and that’s it,” the territory’s second fastest all time 200m sprinter said. ‘Of course I wanted go to the next round and it didn’t happen,” she stated. “But, I have to stay humble, stay prayed up and stay faithful that it will happen in God’s time.”

King will now take the Moscow 2013 experience and build on it.