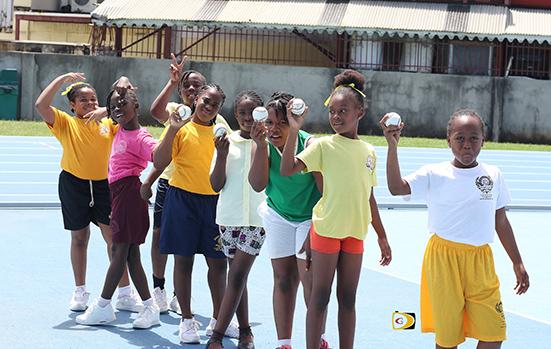 U11 Girls preparing for the Ball Throw PHOTO: Dean "The Sportsman" Greenaway

Following the introduction of pre events last Wednesday for the first time in the history of the Inter Primary Schools Track and Field Championships, schools from Tortola, Virgin Gorda, Anegada and Jost Van Dyke engaged in stiff competition on Wednesday and Thursday at the A. O. Shirley Grounds.

Teams went into the competition knowing where they were in the standings.

The 11 schools in the B Division-schools with an enrolment of less than 100 students between Grades 2-6-kicked off the action on Wednesday.

With defending champion Joyce Samuel moving up to the A Division this year, the B Division title wss up for grabs, as a tight race was on following the pre events.

Anegada's Claudia Creque school which was unable to participate because of inclement weather, was to contest the respective divisions in which they had pre events athletes entered, with the other classes and their scores factored into the competition.

Schools in the A Division competed on Thursday. St. Georges, on the strength of its Boys who won every division of the Long Jump and Baseball Throw, led perennial champs Althea Scatliffe by four points, 57-53. Willard Wheatley was third with 43, while there was a three way tie for fourth between new comers Joyce Samuel, Francis Lettsome and Enis Adams, all having 33 points. Ebenezer Thomas lied in seventh with 29 points and Bregado Flax rounded out the pack with 25.