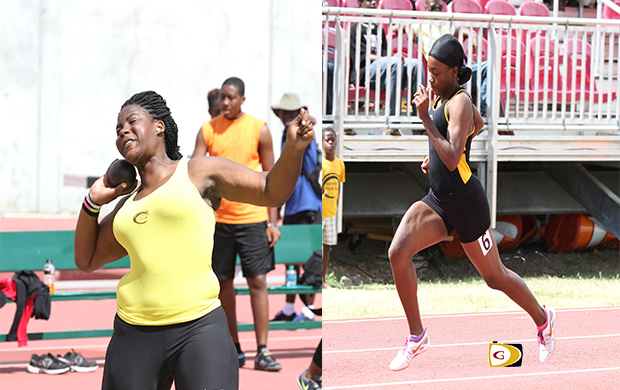 Two weeks after claiming the National Shot Put Record, Top Notch Track Club’s Trevia Gumbs cracked the 13m barrier in her pet event for the first time in her career, when she heaved the 4K ball 13.03m (42’9”). The mark eclipsed the 12.90 she threw on January 18.

Pulled off the turn by Sprint Tech Track Club’s Tarika “Tinker Bell” Moses, Nelda Huggins of Top Notch Track Club powered to a season’s best 24.48 into a -2.7 meters per second headwind, becoming the territory’s first athlete to qualify for the IAAF World Junior Championships scheduled for July 22-27 in Eugene, Oregon. Moses finished second in a personal best of 24.82 seconds.

On the front end of the sprint double, Huggins ran unchallenged and coasted 12.53 into a -3.3 headwind.

Ahead of the Feb 14 Johnny Hassan Relays, the next development meet is scheduled for 6:00 p.m. on Friday at the A. O. Shirley Recreation Grounds, targeting U-15 to open athletes.  Running events start at 6:10. On Saturday, the second meet in Capoons Bay will be held for U9-U13 athletes. Competition begins at 3 pm.