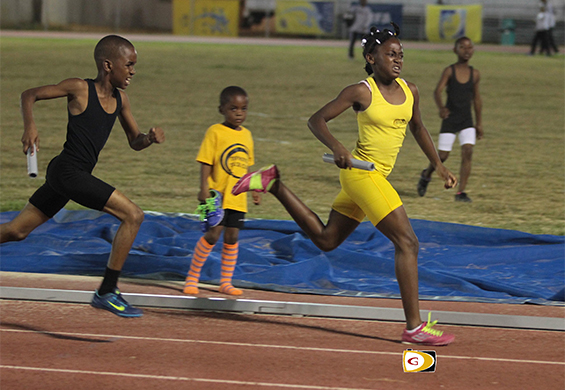 FEBRUARY 17—Fire and Rescue Services can continue bragging until they meet again, after another victory over Police to end activities in Friday night’s Johnny Hassan Relays.

With concerns about sprinting injuries after last year’s inaugural 4x100m Relay matchup, both teams ran a 4x400m relay. Fire controlled the race after the first 280m—even thought Police eroded the deficit—then went on to victory in 3 minutes, 59.19 seconds while Police recorded a time of 4:07.84.

“This one got away from us early. We were preparing for a 4x100 relay, but we didn’t get it together in this one,” said Constable Darren Malone. “We are sprinters, but we want them again.”

The relays, which also included individual events, attracted all the territory’s club teams and the University of the Virgin Islands, saw a series of exciting races.

Top Notch Track Club’s Nelda Huggins improved her 100m season’s best by .03 seconds with a time of 11.94 into a -0.1 headwind. Her mark is .04 off qualifying for the IAAF World Jr. Championships in a second event after running 11.97 last week.

Sprint Tech Track Club’s L’Tisha “Lea” Fahie who will join Huggins in the upcoming Carifta Games in the U18 Girls century, ran a personal best of 12.09.

A week after two women cleared 11.00m in the Triple Jump for the first time in the same competition, twin sisters Tynelle and Trevia Gumbs of Top Notch Track Club, followed suit in the Shot Put.