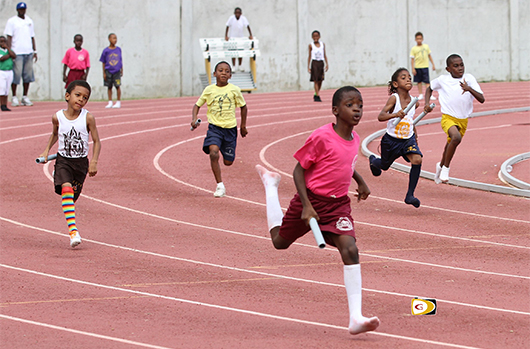 FEBRUARY 26—While traditional power Althea Scatliffe emerged from Zone II with the most qualifiers for the upcoming Inter Primary Athletics Championships on March 13, a number of athletes from Zone III are still on the bubble in their respective events.

So far, in several events heading into Friday’s Zone I competition the data shows comparable marks in both competitions held so far, while in some events, Zone II athletes are the dominant force.

Besides Althea Scatliffe, all the teams in the Zone have advanced athletes to the marquee event. These include: Francis Lettsome, Willard Wheatley, St. Georges, Ebenezer Thomas, Enis Adams, Bregardo Flax and Seventh Day Adventist.

A glance at scores from the meet—which were not available from Zone III because of a communication glitch—shows Althea Scatliffe with 644½ points. Francis Lettsome has 399, Willard Wheatley, 315½, St. Georges, 299, Ebenezer Thomas, 226 and Enis Adams amassed 218 and Bregado Flax 159.

Zone I will have their competition on Friday. Following that competition, those from Zones III and II who are in third place, will see if their marks are among the fastest times allowing them to participate in the Inter Primary Championships.

However, the BVI Athletics Association will be inviting the Top 16 athletes in each event—including marks from the Elmore Stoutt High School (U13 & U15) and others that are in the rankings on http://bvi.milesplit.com to the LIME BVI Youth Championships in early May.

This event will also mark the IAAF World Athletics Day celebration and will be used to select athletes to compete in the Leeward Islands Youth Championships scheduled for Nevis and also this year’s CUT Games in Trinidad.