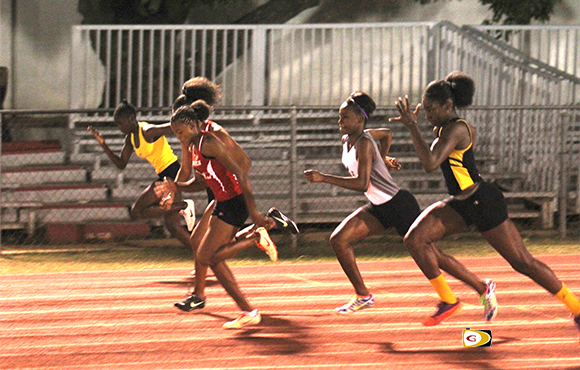 A week after having the longest Triple Jump measurements of their careers, Kala Penn and her Top Notch Track Club teammate Akeem Bradshaw recorded Long Jump bests after cutting the sand at 5.64 and 6.54m respectively, in their U18 Division events.

Penn then ran a personal best of 12.35 second in the 100m, behind Sprint Tech Track Club’s Tarika “Tinker Bell” Moses’ career mark of 12.15. Moses had run a low 1 minute 33s in the 600m earlier in her tune up for her eventual debut, in leading the U18 Girls field.

Running unchallenged becasues J’Maal Alexander did not show, Fast Lane Track Club’s Shaquoy Stephens followed up last week’s 100m run in a personal best of 10.54 seconds by stopping the clock at 10.58. In the process, he pulled versatile teammate Kyron Master to a career best of 10.97, joining the list of High School athletes who have penetrated the 11.00 barrier.

Despite a questionable start in the U18 Girls 400m, the race saw six of the seven entrants dipping under 60:00 seconds. Sprint Tech Track Club’s soon to be 13 year old Beyonce DeFreitas—who was the 2013 CAC Age Group Championships 11-12 Girls individual bronze medalist—ran pas the field with 150m to go en route to running 58.19 seconds. Teammate L’Tisha “Lea” Fahie followed in 59.14. A blanket finish between Sprint Tech’s Zakharia “Zakie” Frett, Judine Lacey and Raw Skillz’s Shaniyah Caul, saw them being separated by .08.

The Toddler 40m Dash, introduced last week, saw two races held in its second rendition with a separate boys and girls race. The Toddler events continue this weekend, targeting 3-5 year olds. Anyone interested in competing in a 50+ 50m dash, can show up for this weekend’s meet.

For the first time in the history of both organizations, the Elmore Stoutt High School Pre Sports Day events leading up to the March 27-28 main event, will be run in conjunction with the BVIAA Development Series starting at 5:30 p.m. on Friday, March 7 and Saturday, March 15.