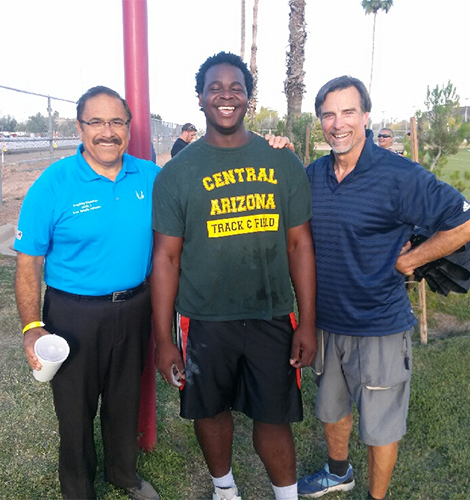 APRIL 14—Eldred Henry, a British Virgin Islands 2013 Carifta Games Discus Throw and Shot Put bronze medalist shattered the territory’s Discus mark and improved his own standard in the Shot, during two competitions in Arizona over the weekend.

At the Mesa Classic Discus Throw Invitational on Friday, Henry, the Central Arizona College freshman demolished Eric Matthias’ 10-year old mark of 55.87m with a toss of 58.18m on his fourth attempt to place third overall.

Then at the Sun Angel Classic in Tempe on Saturday, on his last attempt, Henry released a 17.34m effort to win the Shot Put and improve his own National Record of 17.07m at the Willie Williams Classic on March 21. His marks also put him at the top of the National Jr. College Athletics Association rankings in both events.

“My plan was not only to break the record but to surpass it and qualify for the Commonwealth Games,” Henry said of his Discus Throw mark where he’s aiming to throw 60m and over 19m in the Shot.  “My technique has gotten a lot better than before and I’m beginning to understand the concept of the technique which is allowing me to perform the way I am now.”

Henry who’s turning 20 this year is relatively new to the sport and has moved from throwing the Jr. to the Sr. implements said the transition was a bit challenging because with the lighter weights, he was accustomed to seeing the Shot and Disc going further than with the heavier one. He pointed out that his first coach Omar Jones had him throwing the heavier implements as he was about to enter the senior ranks and that has made his adjustments easier.

Despite his inexperience Henry said he knows he has the potential to grow. “I’m still making simple mistakes but working on correcting them,” he explained. “I would like to take out the school record which is 62m in the Discus and would have to train twice as hard as I’m doing now. If it doesn’t happen this year it’s going to happen next year.”

Henry—fourth and fifth respectively in last year’s Pan Am Jr. Championships Shot Put and Discus Throw—said the international experience has helped him prepare for events like the Commonwealth Games and NACAC U23 Championships during the summer.

“I’ve just begun competing in track a year ago and going and competing in front of thousands of people, isn’t something everybody can do,” he noted. “Once you can get that fear out the way you can relax and perform how you are supposed to. That has helped me out and because in college I have competitions almost every week is helping me to get rid of that fear of competition so its just a matter of how hard and how far you can throw on that day.”