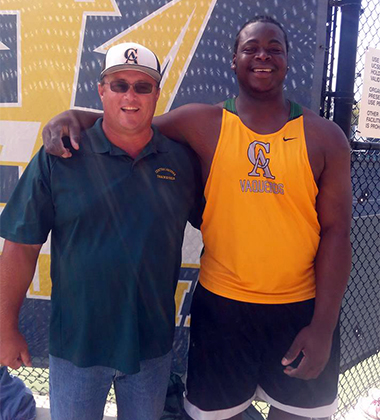 APRIL 29—British Virgin Island’s strongman and Central Arizona College freshman Eldred Henry joined a select group of Caribbean Athletes while demolishing his own Discus Throw National Record, by cracking the 200’ barrier for the first time in his career on Saturday.

Henry was invited to the US Olympic Training Center in Chula Vista, California after he upped his best to 58.18m (190’10½”). On Friday, he had a throw on 56.90 at the center on and a mark of 16.50m in the Shot Put. He said that he was cramping after the five-hour drive from Arizona to California and only had an hour and a half before competition. “Sitting in a van for so long, was cramping because the ride takes a toll on your body because you’re not moving around, but I was able to scrape together that 56.90,” he said. “After the competition, Coach Art Venegas helped some things with my technique.”

Competing against the pros at the Trinton Invitational at UC San Diego on Saturday, the 6’5” specimen who tips the scales at 350 lbs, sent his implement sailing out to 61.90m (203’1”) to finish sixth overall.

“I was kind of shocked because I didn’t think it was that far and I didn’t feel like I gave it a lot of effort,” Henry explained. “My Coach said my timing, positioning and everything was where it was suppose to be and that’s why it felt so easy.”

Henry—who began competing a year ago and is in his first year of using the Sr. implements—attributes his progression from a 51.76m opening throw to 61.90m to film study.

“Coming from the back of the circle, I used to rush it, but after reviewing a lot of videos and watching about 1,000 times with my coach and slowing it down, I was able to see what I had been doing wrong and I was able to correct it and get that throw,” he pointed out. “Film study is very important because you can actually see what you are doing wrong. There’s a difference between when your coach is telling you, you are doing it wrong and be able to see what you are doing wrong. That has helped me to progress to where I am now because I’m seeing the mistakes I’m making.”

After his mammoth throw, Henry is currently ranked #24 on the IAAF World list—the second highest ranking BVI athlete behind sprinter Tahesia Harigan-Scott who is tied for #17 in the 100m with her 11.29 seconds mark. She’s also #52 in the 200m with her 23.33 seconds time. At Monday’s Miramar Multicultural Games, she ran a wind assisted 11.17 seconds to win the 100m as she prepares to run in China next month.

In the same competition, Long Jumper Chantel Malone was fifth with a leap of 6.16m.