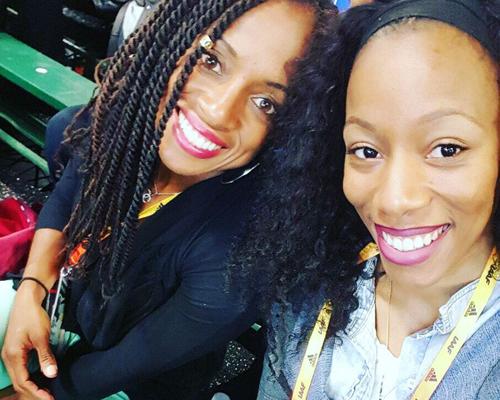 Harrigan-Scott ran 7.30 seconds in her prelim and was fifth but her mark was the third best among the six fastest losers advancing. A 2008 finalist and bronze medalist, as well as a 2010 finalist placing seventh with only three race that season, who narrowly missed the 2014 finals by .0001, was fifth in her semi in 7.23 the 15th best mark of the meet.

Harrigan-Scott said she can't complain about the championships and had a good time. "I executed my start really well in the semifinals," she said. "But, what I'm having a problem with is at the end of my race, I'm losing my body position which I've been able to correct as of lately. The fact that I got out so fast (in the semis), faster than I normally do, I had a hard time getting everything in front of me. The first part of my race is where I want it to be now I have to take it a step further and execute the transition of my race."

She said confidence wise, indoor has set her on track for outdoors but there are some things she still need to work on. "Mentally, I'm where I want to be," she pointed out. "I know if I execute the race I'm supposed to run, then I will have a good season. I'm feeling way better than I did last year and I ran better times than I did last year when I ran 11.14. If I can continue to capitalize on that and stay healthy, I should have a good season."

Ashley Kelly got the ball rolling on Friday night in the 400m where she finished third in her heat after running 54.95 seconds, then later learnt her time was the 13th best of the field as the first 12 advanced.

"It wasn't one of my best (races) and surely nothing I'm proud about," Kelly said. "I have to learn to react better in different situations."

Coming off winning the National Jr. Colleges Weight Throw crown in record fashion, Tynelle Gumbs opened her outdoor campaign by taking down twin sister Trevia's Hammer Throw record with a huge personal best at the Willie Williams Classic in Tucson, Arizona.  Tynelle placed fifth in Hammer Throw throw with a 48.87m heave, to take down Trevia's 47.66m mark of a year ago. Her previous best was 44.99m. Trevia finished sixth with a 47.37 effort and placed eight in the Shot Put with 12.75m.

Tynelle was fifth in the Javelin Throw with a 36.92m effort and settled for 12th overall in the Discus Throw after reaching 40.97m.

In Jamaica, Nelda Huggins, representing St. Jago High School, was second in the Class I Girls 100m in 11.67-the second best mark of her career. She ran 11.85 to win the prelims and 11.75 for second in the semis.

Competing at the Carolina Spring Break Classic in Puerto Rico, Deya Erickson won her heat of the 100m Hurdles with the day's third best mark of 14.17 seconds.  Kala Penn debuted with 17.04, then leapt 5.53m to finish fifth in the Long Jump.

Akeem Bradshaw was second in the Triple Jump with a 14.57m measurement.