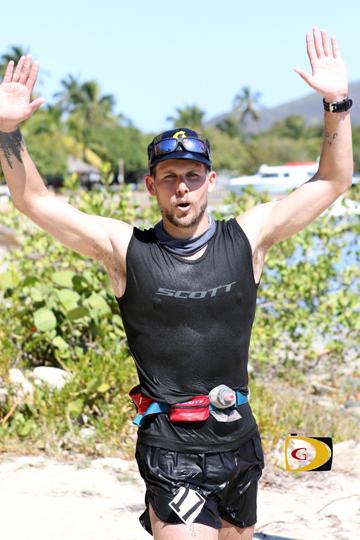 When Eric Senseman of Denver, Colorado toured the 33.4 miles Tortola Torture Ultra Marathon course on Friday-including climbs up Windy Hill to the 1528 foot turn around at Sage Mountain parking lot, then descend through Brewers Bay and over Ridge Road to Beef Island including Little Mountain and finishing at Loose Mongoose-he figured he could do it in about five hours.

Despite dropping the Cane Garden Bay Hill climb from last year's inaugural event, organizers added two miles and 500 feet of elevation with the inclusion of the Sage Mountain trek. Halfway through the grueling run, Senseman adjusted the time by 15 minutes, then went out and had the fastest split over every segment of the course-including 26 minutes and 29 seconds from the base of Windy Hill to Sage Mountain-and a 32:04 descent from Sage to Brewers Bay, en route to an overall 4 hours 45 minutes and 05 seconds time.

While he made it look easy, Sensman said it was a difficult race. "Beautiful for sure, which made it easier to deal with the difficulty," he said. "Initially I said five hours after touring the course but during the race, I said 4:45, when I was halfway through and I realized I was doing better than expected. I've run 20 Ultra Marathons and probably 80 races shorter than a Marathon, which is to say, I have a lot of experience with different terrain, distances and with my own fitness, how training has gone-all that matters in how you figure out how fast you can run."

He said after driving the course and noticing the first 13 miles was flat with small inclines, he figured he could run a 7-minute mile pace and 10 minutes for the final 18 miles. He said on the basis of past results and his fitness he determined the five-hour goal.

"I was a bit conservative. It's hot, difficult to deal with and I don't train in heat so that was an ex factor to deal with it was hard to say, but, it went well," he pointed out. "I kept my body temperature down, lots of water and ice over the head and that allowed me to stay cool and run a good pace."

Event organizer Richard Morgan said it was a phenomenal race and it went better than he could ever imagine. "I couldn't have asked for anything better," he stated. "We had views of St. Croix today and you could see Puerto Rico running along Soldier Hill. Everyone's still smiling and that's the main thing."

He added: "The crazy thing is, when we asked Eric to come down, he had to ask his coach and his coach said yes, but, you're not allowed to run at full speed because its mid season and he has other races to do and this was an add on. This was like a training run for him," Morgan said.

Fournier said the race was fun, but long. "What I found about it is that I'm used to doing all these smaller races and you get your heart pumping in all the small races but in this one, I was never really out of breath, but at some point my legs were just dead," he noted. "I could talk and say hello to people but my legs were like totally dead. The toughest past had to be going down into Brewers Bay, because going down holding the weight just kills my legs. That was the hardest part for me. After that, going uphill was fine."

Klein described the race as being 'tougher than last year.' "I'm not going to lie," she said. "The addition of Sage Mountain and the beach finish definitely adds a little more to the race so it was definitely harder, but, it was fun," she said, noting that she had a goal in mind. "But once I got out there and realize what the additions were going to add, I said forget it, keep running and have fun and we'll see when we get done. The course is beautiful, really big up which makes the downhill even more once you get to it, because that's definitely the hardest downhill of the course. But, its hard race for sure."

In the team category, the trio of Michael "MIkey" Ennis-who replaced Anna Kinkead-defended their title with Mike Killhoury and Julius Farley, finishing in 5:03.24. The 2-man squad of Guy Williamson and Roddy Dos Santos was the fastest of their group in 5:12.19.