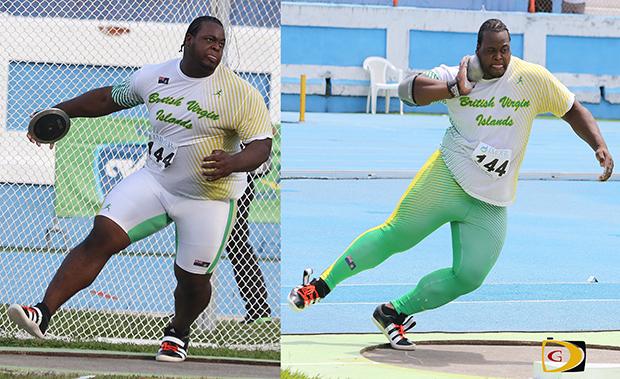 Henry's medals capped of a stellar meet for the BVI as five of seven athletes advanced to finals.

On Friday, Henry opened his series with a 52.85m throw then recorded a season's best 56.45m on his second attempt to secure the bronze, becoming the territory's first to win a medal in a field event. His medal was the first since sprinter Dion Crabbe won two medals in 2000.

"To be honest, I didn't do as well as I wanted to in the Discus," said Henry who was fourth two years ago in Kamloops, Canada. "I had a foul that would have put me in the lead, but, I was content with keeping in the ring. The difference between last time and this time is more experience, more exposure. It always feels good to win a medal but, it wasn't the medal that I wanted. At the end of the day, I have a medal and I'm thankful for it."

On Sunday, he added bronze in the Shot Put with a throw of 19.11m after placing fifth in 2014 and matched Crabbe's two bronze medals haul 16 years ago.

"Physically I was ready, just had a little technical flaw with the finish, getting my left foot around more aggressively, so it didn't result in the pop I needed to get the extra distance," Henry explained. "After the 19.11, I was looking to go from there and kick it up a notch and probably surpass the 20m mark because I was feeling it, like it was there, but technically, I couldn't get the finish to result in a big throw."

Henry said he was better physically prepared that last time as he had a long season and the meet was at the end.

"This season, I had more time to plan out the meets I was going to and have a lot more left in the tank and still have more left for the Rio Olympics," he said.

Tynelle Gumbs finished fifth in the Hammer Throw with a best heave of 53.80m while twin sister Trevia's throw of 46.76m, was good for eight place.

"My first four throws, the turn was good but there was no speed," Tynelle noted. "On my fifth throw, my coach Omar (Jones) told me to go at it and be quick. I was literally grating my teeth and I hit 53 and that was my best throw."

Trevia said she had bad throws and started to over think. "I have to do a lot of mental preparation before my next big competition," she said. "It was a good experience competing against people who were older and better than us. This will give us good experience for the next time."

Trevia was placed seventh in the Shot Put with a heave of 13.53m.

Shaquoy Stephens turned in a non advancing time of 10.95 seconds to finish sixth in the 100m prelims. He finished fifth in the 200m semis in 22.12 seconds but didn't advance. Jonel Lacey missed the last qualifying spot in the 400m after running 55.62 seconds.