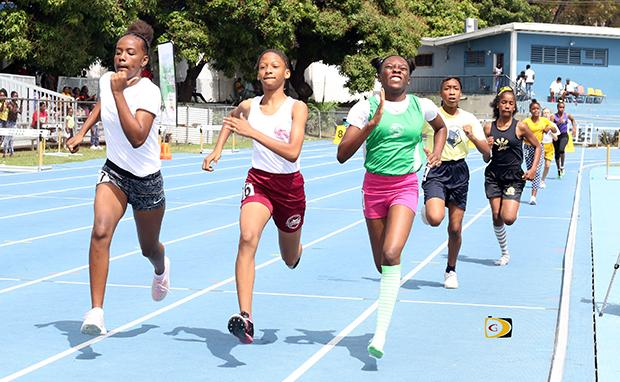 Participants in the U13 Girls 600m takes it out fast and furious PHOTO: Dean "The Sportsman" Greenaway

While Althea Scatiffe-the territory's largest school which has never lost since it was formed in 1983 dominated the A Division competition with 433 points-the real battle was among the other seven teams.

Willard Wheatley had its best showing in years, placing second with 311 points. Joyce Samuel, who moved to the A Division this year, edged Ebenezer Thomas for third place by a point, 273-272. Francis Lettsome was five points back in fifth place with 267. St. Georges who held a four points lead over Althea Scatliffe following in the pre events, finished sixth with 228 points. Bregado Flax had 202 and Enis Adams rounded out the division with 193.

M'Kenzii Crabbe of Joyce Samuel and Carey-Ann Mickie of Bregado Flax, were joint U9 Girls winners with 18 points respectively.

Francis Lettsome's Kadeem Pena had the top score in the 13+ Boys Division with 30. Kadair Maduro of Ebenezer Thomas also registered 30 points in the U13 Boys Division.

Christopher Webster of Francis Lettsome finished with 21 points to claim the U11 Boys category.

Althea Scatliffe's Tiondre Frett had 28 points in winning the U9 Boys Division.