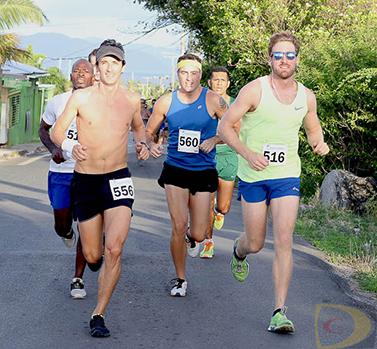 VIRGIN GORDA-Julius Farley fended off Reuben Stoby's challenge, relegating his rival to second place in the Virgin Gorda Half Marathon, for the third successive year.

Farley covered the Virgin Islands most challenging Half Marathon course over some of Virgin Gorda's steepest climbs and scenic vistas and tour stops of Coppermine and the Baths, in 1 hour, 35 minutes and 38 seconds. Stoby finished in 1:35.54. Defending champ Vincent Fournier of Virgin Gorda, was third in 1:38

"My plan was not to go out too fast and I tried to keep up with the guys until I felt confident enough that I could make a move and that's exactly what I did," Farley explained. "At the beginning of the race, about five of us were together for about three miles, until Stoby and I broke away and continued until the 10th or 11th mile, then I made a move. I know Stoby is the kind of guy that won't give up easy and I had to make a move, because he's a faster sprinter than me. I couldn't wait for him to make the first move so I made it."

Farley said the victory was special because Stoby has a winning streak against him since last year. "To beat him is special to me," he said.

Stoby called it the Virgin Gorda Half Marathon jinx.

"Julius is such a consistent runner, anytime you relax, have a bad day, or get your tactics wrong he's going to eat you up and that is what happened today," Stoby said. "I think he actually ran a very smart race. He knows if he gives me up to a mile to go, it's going to be quite a fight and he made his move like three miles out and at the stage, I was really suffering. By time I caught myself, the gap was too much to close, so I had to give it to him. This wasn't my day today, it was Julius' day, definitely."

Virgin Gorda resident and defending champ Vincent Fournier one of the early leaders, said he think he rested too much in the first half. "It's a good race, a hard race and congratulations to Julius and Reuben, they did ran a good race," he said. "I was secretly hoping behind there one of them was going to burn the other one out so I could catch at least one of them, that never happened. But, I'm fine with third."

Former Virgin Gorda resident Kathleen Brownsdon who now lives on St. Croix, was ninth overall in 1:55.32 and said she was lucky to win.

"Maria Mays didn't show up, thanks Maria," she joked. "It was a hard race. I'm not used to running the hills anymore since I live on St. Croix, I don't have the hills like we have here, but I sort of remembered how to run the hills. I've never won it while I lived here so it's very special to come back and in in Casey's (McNutt) last year."

Race director McNutt announced it was her last time organizing the event and thanked participants and the community. Over its course, the event she said, raised over $18,000 for community groups and charities.

"I was in a race once and the winner won some money and turned around and gave it to the water station who helped him do the hardest part and I thought, that's how you should do this, it should be about the community," she said. "They're the ones sharing their roads, they're cleaning up, they're helping out, they're cheering people on. We'll never be a record course where you have elite people coming and even if that happens, it's not always about the runners it's about the community that puts it together and I thought those are the people that should earn the praise, the prize and the cash."