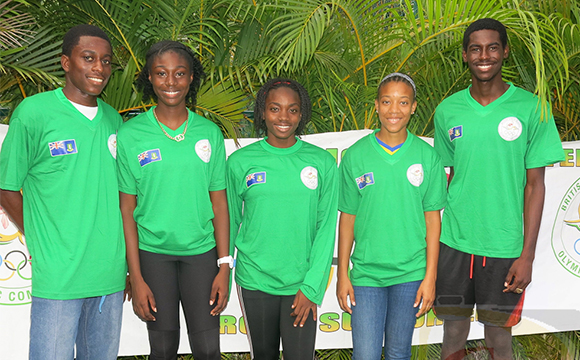 JULY 21—Five track and field athletes have qualified for the 2014 Youth Olympic Games in Nanjing, China and will join a swimmer and sailor at the games next month.

Huggins who qualified in both the 100 and 200m will contest the shorter distance where she’s coming off a personal best and National Youth and National Jr. Record of 11.59 seconds, in winning the U20 Girls event at the BVI twilight Invitational.

Huggins was a Carifta Games U18 Girls 100m bronze medalist and anchored the 4x100m Relay to a bronze medal. She has qualified for July 22-27 IAAF World Jr. Championships in Eugene Oregon in both the 100 and 200m and has recorded a 200m best of 23.91 seconds.

Erickson was a Carifta Games U18 Girls 100m Hurdles finalist and place fifth in 14.32 seconds after establishing a National Youth Record of 14.16 seconds in the prelims.

Penn was seventh in the U18 Girls Long Jump after cutting the sand at 5.60m.

McMaster, who will also join Huggins at the World Jr. Championships, won a bronze medal in the U18 Boys 400m Intermediate Hurdles—in just his third time over the barriers—with a time of 52.85 seconds, a National Youth Record. In his next race over the barriers at the Collegiate height, he ran 53.26 seconds to punch his World Jr. Championships ticket to Oregon with a National Jr. mark.

Bradshaw who took up the Triple Jump earlier this year, bounded 14.90m to place fifth in the U18 Boys division at the Carifta Games. He broke Keita Cline’s National Youth Record in the event that stood since 1991.

During the 2010 inaugural Youth Olympic Games in Singapore, Darnetia Robinson was a 100m finalist and placed seventh.

The track athletes will be joined by swimmer Amarah Phillip and sailor Sam Morell.