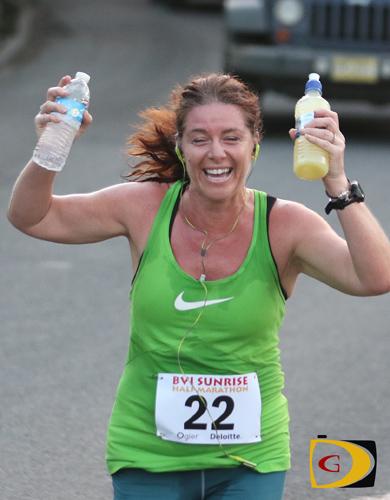 Anna Kinkead tuned up for the Disney World Marathon during the Deloitte-Ogier BVI Half Marathon. PHOTO: Dean The Sportsman" Greenaway

Anna Kinkead considers herself 'the worst runner' in her family, and not one being a candidate for headlines. But, in just her second attempt, she broke Velma George's 22-year old BVI Marathon record during Sunday's Disney World Marathon in Orlando, Florida.

"I'm ridiculously surprised. I honestly can't believe it, I'm still in shock, seriously," said Kinkead who credits Kay Reddy who trained with her and even ran the first 10 miles with her for the inspiration. "I never thought I could go that fast. But, I did the training, ate well, didn't drink-and it was difficult not to drink during the Christmas parties and New Year-if it was another time, I wouldn't have found it difficult."

In Kinkead's first Marathon, she ran around 5 hours and 42 minutes and had three goals heading into Sunday's race. Her first was to break 4 hours 30, her second was to take an hour off her time and her third was to get close to the record.

"It felt horrible," she said, noting that her back was hurting from around Mile 14. "And, I'm never ever going to do another Marathon. My back gave me a little pain and it was okay to Mile 23. Between Miles 23-25, it just got ugly and I lost my sense of humor."

She said her preparations went well, did more long runs than before and took it more seriously. She said before, she'd go for a run, then consumed as many calories as she burned. "I was more disciplined this time with my nutrition," she noted. "I'm very, very happy, still slightly in shock and disbelief, and I'm very sore."

Kinkead said the mental side was the biggest challenge in completing the 26.2 miles event. She said she knew she could do the distance but it was tough to keep going and going. She said between miles 23-25 she wanted to walk a lot.

"I didn't care bout the record. I didn't care about the time. I just wanted it to be over," she reflected. "After the first Marathon, I said never again and I'm surprised that I actually I did it this time. The training takes a lot out of your life. It really does. It's hard to fit the training in for these big races. Mentally it's tough fitting it around your life, family, children and work. In a Half Marathon, I know I can cover the distance. But in a Marathon, you really doubt yourself and you start to be negative. You think about all the downsides."