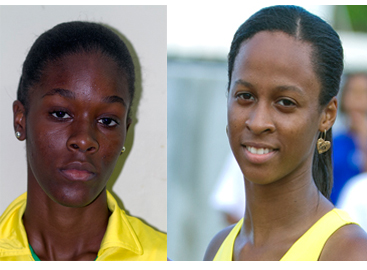 In just her second event, Todman tacked on 84 points to her debut total of 3,181 to finish with 3265 in winning the Arizona Relays on her home turf on Friday. The territory’s National Record holder who was 64 points behind Iowa Central’s Javona Ford, now leads her by 20 heading into the March 3-4, NJCAA Indoor Championships.

On Saturday, she won open Long Jump with an NJCAA Outdoor Championships qualifying leap of 5.58m (18’3¾”), to move past Rose Phillips into fifth place on the all time list in the event.

Also Saturday, Wattley ran a personal best of 7.61 seconds in the MEAC Championships 60m final to place fourth overall, helping Morgan State to a sixth place finish with 42 points. She had lowered her best to 7.62 in the semis. Wattley narrowly missing the 200m final by .08—the ninth fastest time overall—after she ran 25.10 seconds.

Central Arizona College sophomore Keron Stoute had a busy 2012 season debut competing in five events. He led off the winning 4x100m relay that ran 41.20 seconds, then slid past Rupert Solomon into third place behind Paul “On The Ball” Hewlette, on the all time 110m Hurdles list with a run of 16.76 seconds to finish fourth in his heat and ninth overall.

This weekend, Portland State duo of Karene King and Dominique Maloney will compete in the Big Sky Conference Indoor Championships and Illinois’ Ashley Kelly in the Big 10 Conference, where she’s the reigning 400m indoor champion.