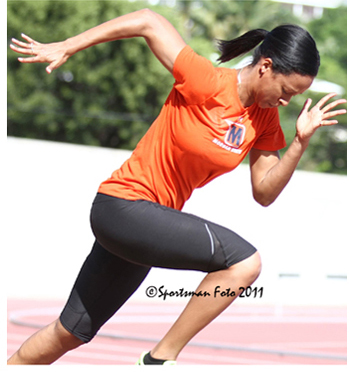 Morgan State's Britney Wattley gets season off with a 400m PR; Kelly has best 100m opener

MARCH 18—With the undercover season behind, the territory’s top athletes kicked off their outdoor season over the weekend, with Morgan State’s Britney Wattley running her fastest 400m since her senior season at the Elmore Stoutt High School in 2008.

As this is an Olympic year, the territory’s top athletes performances will be closely watched to see who will make qualifying standards and join sprinter Tahesai Harrigan-Scott in London this summer at the Olympic Games. Athletes have until July 8 to hit a qualifying mark.

On Friday, Wattley, a Morgan State Bears Jr., opened her season at the Wake Forest Open in Winston Salem, North Carolina, with a 57.07 seconds 400m, running her fastest time since her 57.27 mark en route to capturing the 2008 Elmore Stoutt High School Victrix Ludorum, on April 24, 2008.

Wattley also had her fastest season opening 100m, when she ran 12.05 seconds—05 off her best—in the prelims placing third in her heat. She recorded 12.13 in the finals to finish sixth in her timed final heat and eight overall.

Elsewhere, Illinois Sr. Ashley Kelly opened her season in the 100m. The 200/400m specialist had her fastest season opener when she ran 11.82 seconds at the Black and Gold Challenge, hosted by the University of Central Florida in Orlando. She was fourth overall, before helping the Fighting Illini 4x100m Relay, where she had a second leg carry on the victorious quartet that ran 43.82 seconds—a time faster than they produced in 2011.

At the Willie Williams Classic in Tucson, Arizona, Central Arizona College sophomore Keron Stoute tied for sixth place in the High Jump with a clearance of 1.96m (6’5¼”).